The Adventures of Miss Biosu: Welcome to Lagos 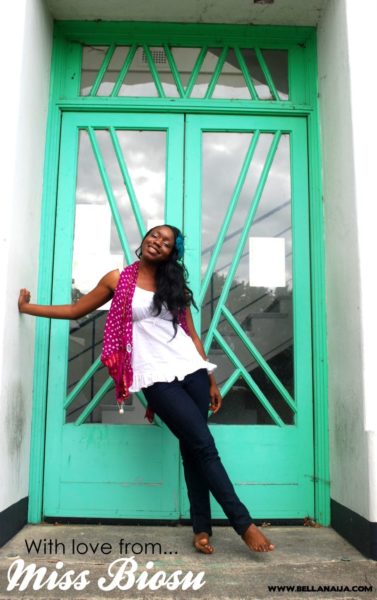 Good morning/afternoon/evening to my ever so intelligent, zealous and creative Bella Naija readers. I can not believe how quickly the first week of The Adventures of Miss Biosu™ has gone by. It feels like only yesterday that I left the cosmopolitan hub of London . Only to be catapulted into the swelling heat and unique smell of Lagos, Nigeria.

Struggling to enjoy a fragile moment of sleep in my restricted economy seat an abrupt announcement is made by the pilot. As quickly as I could blink the plane touched down at Mohammed Murtala airport, I knew there was no going back. As passengers next to me were shuffling to collect their hand luggage I bowed my head at my seat to give myself a two minute pep talk. In order for me to benefit or learn anything from my trip to Lagos it was important that I renewed my mind. This was not London , Paris or even Ghana and the sooner I accepted that, the better. Although I had visited Lagos previously over the past two years, I often fell into the habit of comparing everything to life in London . Whether it is the attitude of sales staff or even the lack of infrastructure, I always had some report or another. This time around I had to embrace Lagos for everything she was and with everything I had.

Sitting in the car on my way to my grandmother’s house I begin to deliberate with myself  -“how would I be making my journey to the Down Syndrome Foundation’s office everyday?” It was either I hire a driver to use with one of my family member’s cars or employ the use of public transport. I muttered to myself all the horror stories that I had heard from my aunties and uncles about using public transport in Nigeria . I even consulted my circle of friends about it; some were for it and as always some were against it, though their argument was based on their concern for my safety. With a day left before I started at the office, I was looking out of my balcony and there were many cars, buses, taxes and bikes passing our house. My mind then drifted to my last holiday in Nigeria . I realised I had spent countless hours of my time mingling with the well-to-do people of Lagos . It was time I decided to see how the everyday man coped with travelling in Lagos . So Lagos transport it was to be.

So as not to throw me into the deep end my cousin accompanied me to the office on the first day so I could become acquainted with the route. Day one I left home feeling anxious but excited. I felt like a kid starting school for the first time. Would I make it from Ikeja-Ojodu to Sururele in one piece? I was optimistic. I located a nice back seat on the danfo (yellow bus) heading for Ojota. The bus conductor put out his hand to receive my payment, without me needing to utter a word… phew (thank God, otherwise my English accent would have gotten some eyes staring at me). Armed with a bottle of water in one hand and a handkerchief in the other I quickly learnt how to deal with my conditions. The second part of my journey was more enjoyable and straight forward. I boarded a BRT bus direct to the National Stadium. I thank my Lord Jesus Christ for the man who created this BRT route. Firstly, the bus ride is more comfortable, and secondly it is extremely quick. For those of you who have never heard of it before, it is a similar structure to having a bus lane, meaning it is exclusive. You’re not sitting in hours of traffic. If more people used the BRT bus as part of their journey to work, I am sure it would reduce the amount of morning traffic on Lagos roads. Funny enough as pleasant as the BRT was, I still some how managed to miss my bus stop. After finally asking a passenger for directions I was now in a place called CMS (near Victoria Island) the young man told me I had missed my stop twenty minutes ago. Instead of getting frantic I simply spoke to the bus driver and he insisted I stay on the bus for his return journey. One okada trip later I reached my destination safely. 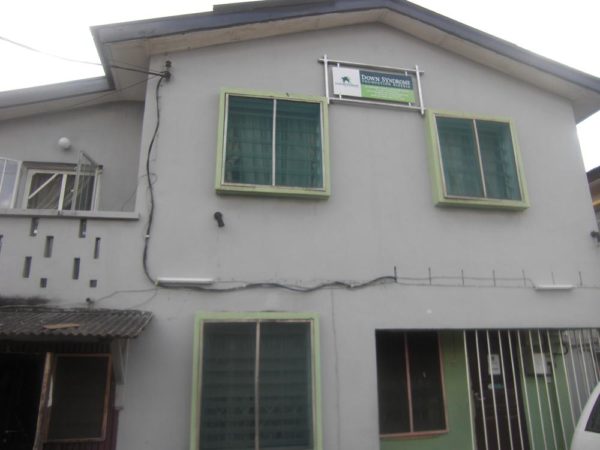 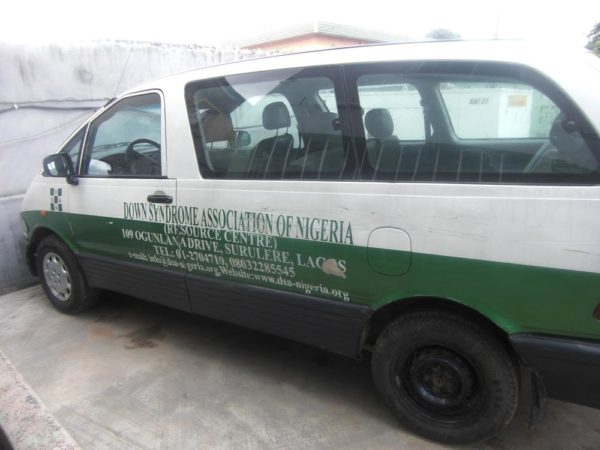 Arriving at the Down Syndrome Foundation Centre I was slightly apprehensive of what to expect. The only thing I was adamant on was my willingness to give of my time and knowledge where needed. As I entered the reception I was greeted warmly by a couple of the staff before going to meet the owner of the Foundation – Mrs Rose Mordi. On first glance Mrs Mordi came across like a simple, elegant yet strong woman. After speaking with her it was clear why she has devoted so much of her time and resources to helping people who live with this genetic condition. I spoke with her in depth and she spoke with passion regarding how the foundation began and what her vision for the future was. Two hours later I was brainstorming with the administration staff to discuss the Down Syndrome Foundation Awareness week that was starting on the 29th of September. The team included a collective of both young and mature employees. It was a pleasant surprise to be in the midst of them, especially as the majority were volunteers rather than paid employees. So that notion that Nigerians don’t do anything for free has been erased from my mind. They do indeed, and I have had the pleasure of meeting some of them. 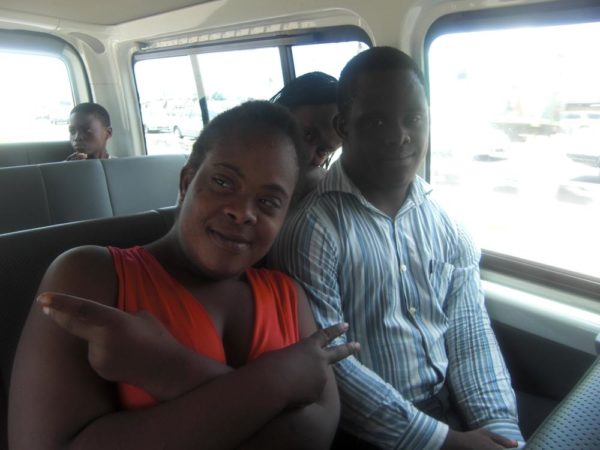 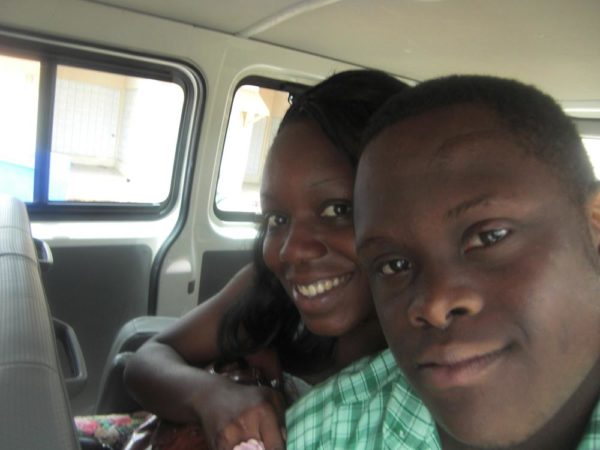 The highlight of the week was meeting some of the young adults who lodge in the boarding house at the centre. I felt so comfortable with them straightaway. They are some of the most loving and pleasant individuals I have ever had the honour of meeting. Though they are forever asking me “Aunty please, buy me ice-cream”. Every morning when we see each other I greet them with a high five clap. Followed by “Aunty, how are you?”

Seeing them happy was a silent reminder that a centre like Down Syndrome Foundation needs to exist despite the severe need for resources.This centre is giving hope to people who have been forgotten or neglected all because they do not physically resemble others.

It is now the end of my first week in Lagos and I am gradually adjusting to the fast paced whirlwind of activities that it brings. In my attempt to relax over the weekend I had the pleasure of meeting the popular eccentric Denrele, the presenter at a poetry event. Though many question his flamboyant way of dressing I was more interested in finding out the matters of his heart. Majority of time we see these celebrities splashed out on magazine covers and on the TV we rarely have the chance to hear how they are contributing to the society. After my encounter with Derenle I felt very proud to have come into contact with someone who was extremely intelligent, caring and mostly a doer not just a talker. I look forward to sharing that interview with you in the following weeks.

Until next week on the “Adventures of Ms Biosu” remember enough talking time to do some walking.

When will you begin your own adventure in life?

Note: Thank you to everyone that has sent me messages. Your word of encouragement has not gone unnoticed. It would be lovely if many of you could join me for the Down Syndrome Awareness Week. This week will consist of a Charity walk, 5-A-Side Football, Gala Dinner and Family Fun day. To get involved drop me an email at [email protected]

To get involved with “The Adventures of Miss Biosu” contact me at www.missbiosu.blogspot.com

Related Topics:The Adventures of Miss Biosu
Up Next