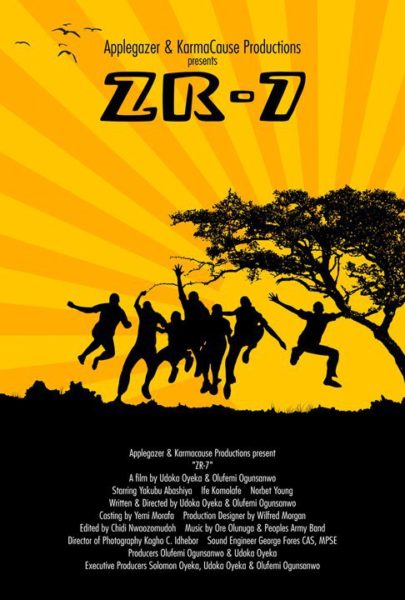 A new crop of young filmmakers are emerging in the Nigerian film industry and in 2011, we expect to see a selection of quality films from these talented young filmmakers.
ZR-7 is a film by Udoka Oyeka and Olufemi Ogunsanwo of Applegazer & KarmaCause Productions.
The movie features a cast of upcoming actors including Ife Komolafe and Yakubu Abashiya alongside Nollywood veteren,Norbert Young.

Here is the synopsis of ZR-7

TJ is a young man in his late twenties, the first draft of his book titled ZR-7 is long overdue for the publisher to review. He decides the entire draft will be recorded on a tape recorder and only his butler (Alphonso) is an actual witness, he begins to tell his story as the action comes alive.

The story is a classic life of boarding school adventure involving TJ with six of his friends (Rolly-D, Chiedu, UK, Tokunbo, Femi & James) while in JSS 1 (7th grade). The boys are initially shocked by all the hoops they have to jump in order to survive teachers, prefects, wicked seniors, dining hall food, thieves, cutting grass, washing toilets, puppy love and all the other regular experiences anyone in a Nigerian boarding school would experience. But when TJ and the boys accidentally see a man and two female students in an uncompromising position, what they do with that information is not their only problem in school, but the resulting scandal would change their lives far beyond their wildest dreams…

The movie is scheduled for release in 2011. While “university campus life” is often explored in Nollywood movies, secondary school seems to be placed on the back burner. Anyone who attended secondary school in Nigeria especially as a “boarder” surely has lots of tales and adventures to share, therefore this is a great area for films to explore. Glad that ZR-7 is exploring this subject and we are looking forward to experiencing the movie when it is released in 2011.

Watch the trailer for ZR-7

For Fame, Money, Love or Just the Thrill – What’s Your BBA Motive? Applications open for Season 6 of Big Brother Africa