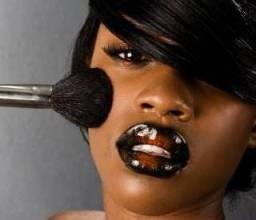 My Sunday started simple enough. I had a fantastic time at church and then stopped over at my uncle’s place to exchange hugs with him and my aunt. That’s when I got a call from my homegirl, Wana Wana. Apparently we had been invited for a barbeque somewhere on the island and she thought we should attend.

As I write this, I am surrounded by men, listening to samples off a new artist’s album and there is no barbeque chicken in sight. Since, I am not the Music Editor for Bella Naija, I couldn’t help but wonder how I managed to get myself into this skillfully set trap and at the same time I am shooting Madam Wana Wana daggers from the corner of my eye! Admittedly, she too has been trapped into this make believe barbeque, so we both decide it’s best to sit and listen politely. In my attempt to become comfortable with my surroundings, I find my breathing has become somewhat restricted and it’s not because the stench of cigarettes has now permanently ingrained itself into my braids, rather it is due to the words coming out of the dark boy standing right in front of me.

Apparently a certain song on this artist’s album is dedicated to all the girls who wear Brazilian hair, carry designer bags, aristos, pololos (which I am told means anyhow girl) and such girls. In the song, the guys are basically labeling these girls as fake and asking them to find more original ways of pursuing fashion. All the men around me erupted in torrents of laughter, as each recounted their own personal experience with these so called fake, Brazilian wearing, Gucci bag holding fashionistas. I resisted the urge to stand up and walk right out of this fake barbeque turned congregation of sexists and instead put my thoughts down on paper- thereby birthing this article.

Excuse me and the white horses some of these guys rode in on, but when are men going to learn to stop putting women down! It seems to me that men, Nigerian men in particular, never seize to take up the opportunity to insult their women. This form of 21st century female bashing is both a growing and worrying trend. Everywhere I go there seems to be some guy making jokes about Brazilian hair or about the amount of make up women wear. Yet, when you look at the women these men are running after they are the exact examples of the women they put down. It really is quite ridiculous!

The other day, one of my followers on twitter lamented about how there was nothing real about Nigerian girls anymore. He droned on, for longer than I believe was necessary, about how everything from our hair, eyelashes, finger nails and enhanced female features were nothing but poor imitations of the original. I was aghast. I couldn’t understand why any full blooded man would choose to take up issue with the opposite gender in such a ferocious tone. Especially when men themselves are not totally devoid of blame in this issue. I mean let us be honest about this. If you saw a girl who was at least two sizes bigger than she ought to be, with Didi styled plaits and no makeup struggling with heavy luggage at the airport, I can bet my bottom dollar that 99% of guys wouldn’t even notice her, not to even mention offering her a helping hand. But if we switched her, with a Beyonce lookalike, complete with hair and nail extensions and some body magic shaping abilities, guys would be scrambling all over themselves to donate their kidneys!

So my dear brothers, what we have here is a simple case of demand and supply. We women know exactly what turns a man’s head. We see the googly eyes you make at the women with long lashes, brightly coloured lipstick and long flowing hair. We see the approving nods you give to women with the 24 inch waist and nicely shaped derrière. We’ve noticed how you adjust your appearance in the mirror and the unhindered respect you give when you see a woman draped in expensive accessories. So before you start pointing fingers, maybe it’s time you reevaluate your own wants and priorities. After all, if men didn’t patronise the so called “Aristo girls” they would have long gone out of business.

Instead of complaining about how unnatural we look, maybe you should spend more time making the women around you feel appreciated for who they are instead of constantly making us feel like we have to live up to some ideal of womanhood. Open the car door once in while, pull out a chair for her to sit down, look at her like she is the only woman in the universe and appreciate every contour and line on her body, then maybe just maybe, that natural beauty you desire to see will start to emanate from inside. In other words, perhaps, it’s time for the men to change their style!

Youth Organisations Ask Nigerian Presidential Candidates – “What About Us?”

Glory is the host and executive producer of Inspire Series, the web talk show which uses the collective stories of everyday women to inspire others. She believes women are more than hand bags, hair, make-up and other externalities and is passionate about about pursuing purpose and living above societal conformities. She is also a day dreamer, and romantic at heart who loves TV, food and family. Follow her on Twitter and Instagram @inspiredbyglory and read more from her on www.inspiredbyglory.com