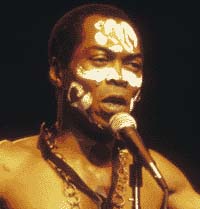 When news broke on the internet and other more traditional media outlets that Fela!, the Broadway show was showing in the United Kingdom and the United States, I was one of those people who wondered why it was non Nigerians who thought to honour the most prolific musician, entertainer and multi-instrumentalist from our shores. Hunched over my laptop, I cast my mind back to when I was a little girl and would go on visits to my uncle’s and all he had in the way of music were large, round gramophone records with the picture of this bare chested man with a cocky grin.

But not everyone in my generation is fortunate enough to have gone to the school of Fela! Especially for people in generations after mine, the knowledge of Fela and his message is almost nonexistent. This is almost typical of the Nigerian system which allows pivotal elements of our history and culture to be replaced by the dictates of European and other foreign popular culture, when we have many aspects of our own culture to celebrate and uphold! So for those of us who don’t know, here is a short break down of the legend that is Fela!

For those who don’t know Afrobeat was pioneered by Fela; a complex fusion of Jazz, funk, psychedelic rock, Nigerian/ Ghanaian High life and traditional West African chants and rhythms which he sung mainly in pidgin and sometimes Yoruba. Characterized by the use of many instruments such as the baritone saxophone, muted Western style guitars, drums, trumpets, horns and the shekere, the performances of Afrobeat utilized a large orchestra and many vocalists and dancers and was known to be very outlandish and wild. A typical African audience delight!

Art: not for the sake of art alone

Fela chose to use his music as a political tool to speak against the infringement of human rights, dictatorships and European cultural imperialism. His music spoke out against the subjugation of the African race, the exploitative side of modern religion and the evil monopoly of multi- nationals. It is easy to imagine that if Fela was singing his music now in 2011, it would unlikely consist of carefully prepared political praise. After all, praise singers are not sent to prison over two hundred times!

In recent years there has been a revitalization of Fela’s influence on music and popular culture, culminating in another re-release of his catalog controlled by Universal Music, off-and-on Broadway biopic shows, and new bands, such as Antibalas, who carry the Afrobeat banner to a new generation of listeners.

After a private listening session for her label’s bosses, Beyonce says that her fourth studio project set to be released in June 2011 is inspired by, wait for it, Fela’s music! “How random”, she says.

Her husband, Jay Z at the opening of the Fela! Broadway show in the States, and speaking to MTV news on why he chose to produce the show had this to say, “It’s an inspiration, about the power of music. Here’s a guy that’s on the other side of the world who was influenced by James Brown, who takes this thing and makes his own sort of genre of music. I just think it’s fascinating.”

With the above it is clear that Fela’s life and music has had a far reaching effect across the boarders of the country he called home. But where are the Millions of Nigeria’s who Fela sang to?  What expression of inspiration have they shown? The salience of these questions becomes even more glaring when compared with recent remarks from Yeni Kuti in her interview with Glory Edozien, featured in Elan magazine. “It saddens me that there aren’t many afro beat bands. When I go to America they are playing afro beat, even in Japan there are Afrobeat bands. Everybody, expect us on in Nigeria. We need to claim afrobeat as ours before they take it away from us, because one day we’ll wake up and it doesn’t belong to us anymore. They will carry our thing if we don’t look after it. It’s worrying and saddening. More corporate organizations need to look into keeping afro beat in Nigeria. The band that plays for Fela! on Broadway, for example, is an all white afro beat band.

Of course there isnt anything wrong with other cultures being inspired by Afrobeat and its originator, Fela. The point here is we ourselves need to imbibe our own culture instead of waiting for others to do it first.

Without honour at home

Eye brows have been raised as to why it is the foreigners who are producing, directing and acting Fela!  Where is Nollywood and the Nigerian music industry in all of this? Why is the lead role not acted by one of his sons and possibly one of our own musicians. This leads me to think that it sometimes takes the foreigners to remind us of what great treasure we have. It is humbling, this great appreciation by foreigners of Fela’s music, especially when the statement of Stephen Hendel, the lead producer of the show is considered in context; “The culture here is very US- centric. The US does not normally go beyond its borders for artistic inspiration.”

Peradventure it would take Fela! showing in Lagos in a few days for us, Nigerians to see just what great talent we had in our midst and who still lives on in his music. Fela is the Chinua Achebe equivalent for music in Nigeria, the Prophet and Chief Priest of the Kingdom of Afrobeat and the one who chose to speak truth to power, giving us such evocative lingo such as “shuffering and shmiling” which in my opinion deserves a special place in the African dictionary.

For someone who dashed hopes that he would become a doctor and instead chose to pursue his love for music, pioneering his own unique Afro beat brand in 1967, his music speaks of hope, angry defiance against institutionalized oppression and the equality of all human race, which have now become much clearer since his passing in 1999.

It is worthy to note that any entertainment industry support fund would be best used in honoring such great legends who stood for something with far greater value than just entertainment.

After a sensational showing by the Fela! cast, we at Bellanaija.com have decided to pay our own tribute to the man, who through his music defended and upheld the African and Nigerian ideal. For the days leading to the end of April, we will be bringing article like tributes that both celebrate and attempt to uncover the man that was Fela and the dynatsy he has left behind. Join us, as we pay tribute to the legend that is Fela!