Who Is Heading Home This Week? Danny & Nic "Bounced" on Sunday | Everyone in the Heads House except Vina is Up for Eviction on Big Brother Amplified 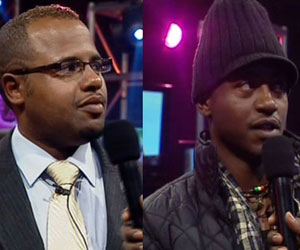 Africa voted in large numbers, making this week’s M-Net Big Brother Amplified vote one of the biggest ever – but Danny and Nic couldn’t pick up enough votes to stay in the game.

With 5 Tails Housemates nominated for eviction this week – and a Head of House saving themselves for this first time on Big Brother Amplified – Alex had some explaining to do!

When IK asked him to reveal his decision, he said: “Crunch time! You know what it is, it’s part of the game that we hate, but it’s necessary. I was put up this week and I’m Head of House, so I swapped myself.” The Tails Housemates listened intently as he went on. “The person that I chose to replace me, you know, no animosity, its part of the game. It’s more of a chess move. The people that were put up are strong characters and this person is going to offset the nominees that were put up. I hope that the viewers will see what I’m trying to do and vote wisely, so – Karen,” he said as the Housemates sat in silence.

When the time came to make the eviction announcement, IK asked Kim and Danny to stand. “Kim you’ve been saved – Danny, please leave the House now,” he said, after making them wait in anticipation.

As the Ethiopian emerged on stage, IK asked him what he thought the root of all the tension in the House was. “If you’re a strong character, you’re always up for eviction and I’m proud I’m up there with all the strong characters. I’d like to thank all my fans in Africa!” Danny said with his arms raised, drawing a massive cheer from the Big Brother Amplified studio audience. He couldn’t guess who had nominated him, but thought that “the girls” may have helped put him up for eviction.

As IK revealed who had nominated him, he was surprised to see Alex name him – and when asked afterwards which nomination offended him the most, he chose the Ghanaian’s. Then it was time to Blow a Fuse. “Alex!” shouted Danny, immediately, before IK had a chance to read out the punishment. “Give it some thought, son!” IK said, before reading out the Fuse: “Every time anyone in the House laughs out loud, this Housemate must throw his or her arms around whichever Housemate is closest to them and kiss that Housemate. This fuse will last until this time next week.” Unsurprisingly, Danny chose Alex as the recipient!

The drama didn’t end there, though, as IK took viewers into the House for a second time to evict another Tails Housemate. He called out the names of Karen, Nic and Luclay, asking them all to stand. After a tense pause, he told Karen and then Luclay that they were safe, meaning that Nic was evicted.

When Nic joined IK on stage, IK revealed that viewers had voted in large numbers this week and asked him what the most difficult part of the show had been, for him. “Just getting to know myself – I thought I knew myself before getting into the House, but once you’re inside you get to know yourself, you get to know how you react to people, react to your own emotions, so the biggest thing was the battle with myself,” said the Kenyan.

“Of all the people in the House, who was your favourite and who was your least favourite?” quizzed IK. “My favourite was Kim because I got to know her…” he started. “Yeah you did!” teased IK, in reference to Nic and Kim’s relationship. “No, no listen don’t go there, relax man!” said Nic. “I got to know her, she has this wall that she puts up but once you get through she’s a really soft person inside, extremely intelligent. There wasn’t anyone I disliked, I had a bit of an issue with Karen in the beginning but then afterwards we got to know each other, settled our differences and that was OK. There’s nobody that I disliked in the house,” he revealed.

Once he had seen the nominations – and seen that Kim had nominated him – he said he wasn’t surprised as they had “gone through a bit of a rough patch”. IK probed the relationship further: “About that rough patch – did you ever reach the point where you were thinking that being in a relationship inside the House, sort of, is bad for you in the game?” “It’s not that it’s bad,” Nic told him, “but I didn’t come here to get into a relationship. I feel like I was being pulled into one, I didn’t want to pull someone into something they weren’t prepared for and I didn’t want to keep it rolling like that”.

Next up was Nic’s turn to Blow a Fuse. IK revealed the details: “One Housemate must run up and down the stairs shouting ‘I Am Amplified!’ every time Big Brother makes any announcement in the House. This fuse will last until this time next week.” Nic didn’t think about it for too long before naming Luclay as the recipient of this tough punishment. “What are you going to miss most about the House?” asked IK as a parting shot. “I’ll miss my pom-poms!” was Nic’s surprising answer – in reference to the pom-poms he had to wield as part of the Fuse he received from Ernest. “I really got attached! I’m also going to miss the Housemates – I made some good friends, but we’ll meet up afterwards,” said the Kenyan before departing the stage.

Earlier in the show, hip hop stars VIP from Ghana had gotten the audience jumping, before returning at the end and again blowing the crowd away with their hit “Away”.

Viewers had also had the chance to hear from last week’s evictee Confidence. When asked about who she had bonded with most in the House, she said: “I got on well with the boys because I hang out with boys and I feel much more comfortable around them – but nothing romantic, not now!”

The show started with 26 Housemates – and now, just 17 remain. Two will walk away with massive prizes of USD200 000 each on 31 July – there’s still a lot of action to come on Big Brother Amplified! Big Brother Amplified is headline sponsored by Coca-Cola. Fans can catch all the latest news, video – and all-important voting information – at www.mnetafrica.com/bigbrother. Tweet Big Brother @BigBroAfrica, send SMS messages to the on-screen strap, visit the Big Brother Africa Facebook Group to get the low-down on the continent’s favourite reality show and get updated news and two video streams – and houses – by pressing the “OK” button on your DStv remote when on DStv Channel 198.

Evictions – Heads House – Everyone but Vina is Up for Eviction!
The Heads Housemates did a thorough job of spreading the nomination love on Monday (20 June) on M-Net’s Big Brother Amplified – all but Vina are in danger of being evicted this Sunday!

Zeus, Hanni, Vimbai, Wendall, Lomwe, Millicent, Felicia or Sharon O could find themselves moving to the Tails House – or heading home altogether – after the viewer vote this week.

This week’s Head of House ‘save & replace’ appeared to be one of the easiest in Big Brother history, as when the nominations were announced, only Felicia was not in danger.

Big Brother called first-time Head of House Vina into the Chat Room to make her decision and she couldn’t help but save herself and put the Malawian up for eviction in her place.

While the rest of the Housemates referred to her potential decision as ‘obvious’, Vina seemed to wrestle with the way Felicia would react to the swap – but ultimately the fact that she has been up for eviction every ‘Heads’ nomination week swayed her decision and she decided to take herself out of the firing line.

· Vimbai, noting that Millicent needs to stop using alcohol to help her express herself, nominated the Kenyan.

· Vina tagged Zeus for being rude during the ‘worm pizza’ task last week and then Wendall, for hiding her things.

· Zeus nominated Vina for her constant negativity and lack of commitment to the ‘team’. He also nominated Hanni, calling the duo the “Siesta Sisters” for constantly taking afternoon naps when everyone else was contributing to keeping the House in running order.

· Lomwe’s nominations were also based on laziness – he named Sharon and Hanni as his choices.

· Wendall said that he was nominating Sharon O because he saw through her plan of flirting with the boys in a bid to avoid nomination.

The winner of Big Brother Amplified, headline sponsored by Coca-Cola, will be named on 31 July – and the power to award TWO prizes of USD200 000 each to TWO winners, rests in the hands of the viewers.

Experience Le Petit Marché at the Silverbird Galleria This Sunday!