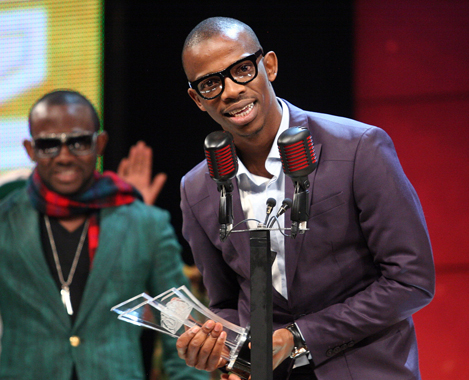 We can’t wait to unleash all the exciting red carpet and on-stage photos from the 2011 Channel O Music Video Awards! In the interim, we will love to know what you thought about the show and the winners.

The most coveted award – Most Gifted Video Of The Year went to South African star Zakes Bantwini for his video “Wasting My Time“.
As we expected, our Nigerian stars Darey, Naeto C, Ice Prince (feat. BrymO), D’banj and Banky W won various major awards at the event.

The big question of the night was “Where is D’banj?“, the star had been hyped as the night’s major attraction as he was the recipient of the 2011 Channel O Music Awards Special Recognition Award.

D’banj reportedly missed the show due to a dispute/oversight/miscommunication over his flight ticket class (BN has reached out to both parties for a statement).

Most Gifted Kwaito Video
The Dogg- This Is My Time

Most Gifted Video Of The Year
Zakes Bantwini- Wasting My Time

Most Gifted Duo, Group or Featuring Video
HHP, Teargas & Liquideep – Born For This

Most Gifted African East Video
Keko, Radio & Weasel- How We Do It (Remix)