When I first read the news of a baby born in Pakistan with six legs, my heart went out to the child and his family. His case was one in a million – the extra limbs were that of conjoined twins who did not completely develop in the womb.

After the doctors established that the baby did not have six legs, but had got extra limbs of conjoined twins, they suggested a surgery which was carried out on Thursday 19th April, 2012 and were successful in removing the extra limbs.

The young boy from Karachi in Pakistan was born on Saturday April 14th, 2012 by caesarian section. He had a succesful eight-hour operation by a team of five doctors who fought to save the boy’s life at the National Institute of Child Health (NICH) in Karachi, Pakistan yesterday. He is now said to be in stable condition and his parents are rejoicing over the successful operation.

His complex birth is the first ever in the history of Pakistan.

The head of the NICH, Jamal Raza, said the abnormal birth was the result of a genetic disease which would affect only one in a million or more babies. “It was strange that apparently an abnormal baby with six legs was as normal as other children,” he said.

Before surgeons could operate they said they had to work out which of the limbs belonged to the boy and which to his twin. A team of five doctors was assigned the task to examine the baby and carry out initial tests like blood test, MRIs and X-rays to diagnose the case.

According to media reports, father of the baby, Imran Sheikh, is an X-ray technician whose meager salary of 6,000 Pakistani rupees a month was impossible to cater for his son’s treatment at the hospital. He appealed to philanthropists and the government of Pakistan to help his baby boy. Pakistan Baitul Mal – a charity organization in Pakistan – helped the poor family for their child’s treatment. The family also collected some money from their own sources while the major help was tended by the Baitul Mal.

‘We are a poor family. I am thankful to the government and doctors for helping us successful operating my baby,’ he said.

He said they were planning on naming their son Umar Farooq.

The news of this boy’s successful surgery in faraway Pakistan is gladdening. Thankfully, this boy would be able to live a normal life with two legs. Through no fault of his or the mother’s his story could have been a different one.

A parasitic twin is sometimes referred to as an asymmetrical or unequal conjoined twin. It occurs when a twin embryo begins developing in utero, but the pair does not fully separate. One embryo continues developing at the expense of the other (the parasitic) which will rely on the body of the other for blood supply and organ function. It is incompletely developed and dependent on the other twin. The independent twin is called the autosite. In some cases the body of one twin absorbs the other during development, known as fetus in fetu. In January a boy in Peru was operated on to remove his parasitic twin from his stomach.

I say a big ‘Well Done’ to the doctors who performed the successful surgery on the young boy. And a big ‘God Bless You’ to the philanthropist organization who helped pay the boy’s medical bills.

May you live a long and fulfilled life, Umar. 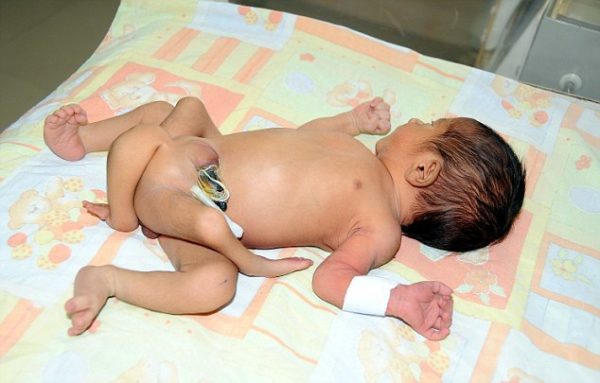 Some of the doctors who performed the surgery