BN Prose: Till Death Do Us Part by Jibola L 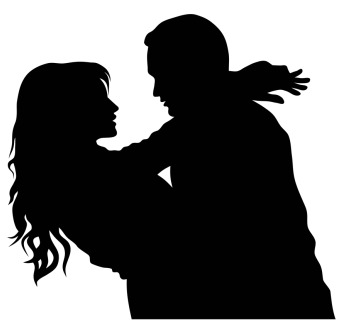 Anniversaries are wonderful mostly because they remind you of how far you’ve come. When the venture — in this case, a marriage — is still fresh, it’s something to look forward to.  A couple of years down the line, complacency and boredom set in, and what used to be a special day becomes just another day. Unless you’re Funmilola. “L…” she sang, “…is for the way you look at me“. At 10 years, the novelty would never die. “O…” she continued, as she and got out of the bath “is for the only one I see“.  She smiled thoughtfully as she toweled her body.

To her, it wasn’t even because Bade was a breath of fresh air, or that at 32 she had given up on men and the idea of marriage in itself. It had more to do with finding love and companionship and then realizing that all the crap she’d been fed growing up thanks to Disney and Harlequin really didn’t come up to scratch beside the real deal.

Ultimately, it was about finding a friend whose ears never got too full to hear her rants and then miscellaneous gossip about people he hardly even knew. It was also about having that friend be a lover fully committed to pleasuring her body. And finally, having that friend and lover be a husband; providing, guiding and protecting.

She looked at herself in profile in the mirror, her yellow sun dress gently caressed her curves, her face curving up in a smile. Bade would be pleased. Together, they were a bundle of contrasts; where he was outgoing, she preferred to be quiet; he was as light skinned as she was dark – Funmi Coal, he fondly called her. She smiled as she moved to the kitchen where she had already packed his favorite – White Amala and Efo Riro, in a cooler.

As she walked over to the bus-stop, she knew he would have forgotten. She had gotten past being angry with him over it. It had even become amusing, watching him act like he’d remembered and he had some master plan. She would then give him a hard time, a little and then laugh as he smothered her face with kisses. As the Ojuelegba bound bus from Ikeja breezed past bus stop after bus stop, her thoughts drifted to the day the journey officially began. You would imagine they’d be faded but they were still fresh in her head. He had pulled a surprise on her with the vows. Rather than take the standard ones, he’d had an arrangement with the clergy-man. A stroke of panic had hit her when his words weren’t matching the pamphlet she held in her hands. She looked up to see him smile at her as he said those words…

“I, Bade Olayinka , choose you”. His voice cracked with emotion and then he paused. “I choose you Funmilola, as my wife, my partner in life and my one true love and my best friend. I will love you because I was made for you. For all of my days, I will cherish our friendship. I will trust you and honor you, I will laugh with you and cry with you. I will love you faithfully and you alone, through the best and the worst, through the difficult and the easy, in sickness and in health for all my life – till death parts us.

It was all she could do to not skip her own vows and just kiss him over and over. The tears she shed softly on the bus, in remembrance of that event, were a shadow of the ones that streamed down her cheeks at the altar. The conductor’s voice brought her out of her reverie. “All passenger!” he called out, signalling that they’d reached the final bus stop. When the driver had stopped long enough for her to get off, she walked in the general direction of Yaba on Ojuelegba road.

Wrapped up in her thoughts, a gentle breeze toyed playfully with the hem of her dress, but if she was aware that the wind was about to render her indecent, she gave no indication. She just trudged on, her chin tilted just a tad with a small smile on her face and her eyes still glassy with emotion.

Further down from the road from where Funmilola walked with purpose to celebrate the anniversary with her husband, a small crowd was gathered around a mad man. Like the many others in Lagos, people hardly cared that they were not in an institution. He had the requisite loony ensemble – shaggy hair and beard, perennially dirty clothes, crazed look in the eyes, and a raffia rope tied in a windsor knot around his neck. He was holding court by the side of the road, with the people hanging on to his every word. The older folk in the crowd were laughing,, the kids giggling endlessly while others just looked on with pity.

“Eeeeeeeeeee is ekwal to EM CEE SQUARED! Not MC like Master of Ceremonies o ehen! M for mass, c for speed! I know speed is supposed to be S but you know light is a fast, sharp bad guy so his own speed gast2be different! Ehn? Question? Whose mass are we measuring? Ah I have noooo clue! Class dismissed!“

“Professor of Life!” Someone in the crowd called out.

“Quiet! Quiet! I’m on to something here!” He said, seeming to be  deep in thought. He looked out into the crowd, and noticed someone on the edge of the people gathered. The people began to scatter for fear he might have taken an interest in them.

“Funmilola mi…” He called out softly. The crazed look in his eyes seemed to have departed, to be replaced by a look of recognition and tenderness. She just stood there, frozen. This crazy man, her crazy man, her husband. The dirt and grime meant nothing to her as he pulled her close to him.

He had walked out of the house one morning while he was being nursed to health, the aftermath of an Okada accident, brain damaged from the impact on his head. They told them at the hospital that he may or may not get better  but they concluded with “Take him home”

He walked up to her. He said nothing, neither did she. Her jaw was clenched as she tried hard to hold back the tears. Four years on and she kept hoping he would get better. The first two years had been a war in trying to get him to stay in a psychiatric hospital long enough to be treated. He always managed to break away and roam the streets. The hospitals were filled to capacity anyway, so nobody cared.

He sat there on the pavement and she sat facing him, without the slightest hesitation. As if she suddenly remembered the cooler, “I brought you food” She said. He nodded. She brought out the bowl of White Amala and the Efo riro. He never stopped looking at her eyes; while she did everything she could to avoid his gaze. He soon focused his attention on the food, eating with both hands, not minding whether the morsels of Amala got caught on his beard or if the stew splashed on Funmilola’s yellow dress. She just sat watching him.

He stopped suddenly, mid-way through the meal. “Happy Anniversary, baby” He reached for her hand with his soiled hands. “I love you…. A thousand times, I love you. With all of me, I love you. With all I am and all I own, I love you. You’re the best thing to have ever happen to me. In all the world and the galaxies, you’re the most beautiful. Ayanfe mi, Eleyinju ege, ma ke mo” he said, smearing the tears on her cheeks with his grimy hands

“Olowo ori mi…” Her voice betraying her, she cracked.

“Funmi stop crying. It will attract the aliens!” He said as he stood up suddenly. “The aliens! The aliens! I have to go! Baby, I have to go! Oh my god! I’m going to be late for that meeting! The aliens will make me late!” He was there, sharing a moment with her, and then the next, he was gone. He ran like the hounds of hell were at his heels. For the first time she noticed the crowd was still there. Their entertainment replaced with such sadness had them looking at her with pity. Soon they remembered places they had to be and one by one, they walked away from the scene. They were going to share the touching story of the mad man’s caring wife when they got home.

There’s this thing about grief that makes you forget awareness, so Funmilola kept walking. She had no idea when she had gotten on an Ikeja bound bus or even when it had started moving. She could only see the world through the fish bowl of her tears. Till death do us part… That vow echoed over and over in her head. A vow requires strength, a quality she felt she had grown weary of. At the front of the bus, the driver wondered what could cause the beautiful woman beside him to shed so many tears so freely.

Till death do us part…

The driver was too focused on the road to notice she had opened the door. He only became aware when she had thrown it wide open and hesitated only a second to mumble something crazy about death and freedom and then she leaped out. The Peugeot behind them could not swerve away from her body soon enough.

At that instant, a mad man running away from the aliens in his head stopped suddenly. In that moment, he realized there was something off about him. It wasn’t just his hair, his clothes, or how he smelled. Something was off. Contrary to what he’d thought, he really was mad. He was the crazy one, not everybody else. Just before the shame that comes with such a realization dawned on him, he remembered her. His wife. Funmilola mi. He knew she’d be sick with worry.

He turned back. It would be a long walk, but he would find his way home.