Sign Up to Win $500, 1 Year Supply of Aesthetics Cosmetics, 6 Month Mentorship Program & More Via the Battle of Make-Up Artists Competition - All the Details 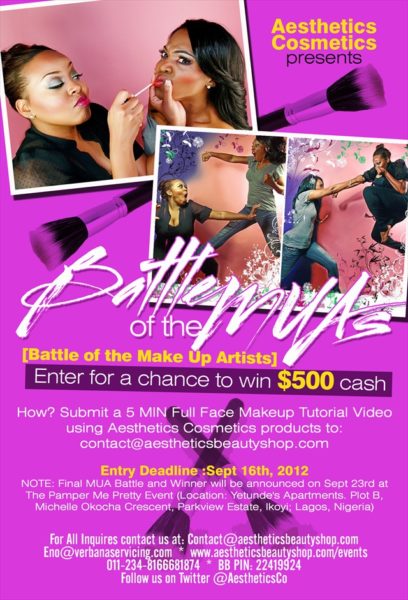 On Sunday 23rd September 2012, rising beauty brand Aesthetics Cosmetics will hold the first edition of the Battle of the Make-Up Artists (MUA’s) in Lagos. According to Gbemisola Ogunyomi (CEO, Aesthetics Cosmetics), the Battle of MUA’s show will serve as a platform for all make-up artists (both professional and freelance make-up artists) to showcase their skills in a professional battle where the final contestants will compete for the chance to be the ultimate winner and cart away amazing prizes.

Prizes to the be won include;

Rules for the Battle of MUA’s competition
Round 1 – All contestants must submit a 5 min full face make-up tutorial video using at least 1 Aesthetics Cosmetics beauty product during make-up application. Videos should be submitted via e-mail to [email protected] and/or their Youtube Channel – www.Youtube.com/User/AestheticsBeauty on or before Sunday 16th September 2012 with all details described above or your entry will be automatically disqualified.

Round 2 & Final Round – All selected contestants will get the opportunity to showcase their make-up skills at The Pamper Me Pretty Event on Sunday 23rd September 2012 and compete for the winning prize in the final MUA’s battle – the winner will be announced at the Pamper Me Pretty event.

After Spending a Whooping N2.2Billion, Team Nigeria wins No Medal | How can we ensure Better Performance at Rio 2016?