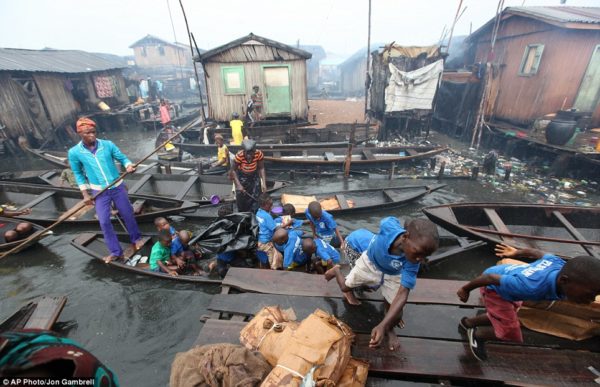 When the American rapper, Rick Ross, released the video of his Nigerian version of ‘Hold Me Back’, it elicited a range of reactions from Nigerians. The video showed in a very graphic way, the harsh reality of the pain and struggles of life in Lagos slums. Many people got angry with the rapper for portraying Nigeria to the world in such an insensitive way, saying it would give foreigners a wrong impression about our country.

Hold that thought about Rick Ross and his video for a second, let’s look at the reality for a minute.

I felt totally heartbroken to read the Daily Mail UK feature on Makoko slums. The article titled “The floating slum on stilts: Staggering pictures of the families who fight for survival on a sea of festering filth” also had pictures that showed the harsh living conditions families at the Makoko slum are faced with.

Growing up in shacks built on murky water in the midst of filth; men, women and children struggle through life each day.

Their canoes drift on the water as piles of rubbish float outside their shacks.
Shabby shacks on stilts, floating waste and rickety boats fill the expanse of murky water.
But for the thousands of poor people forced to live in Nigeria’s infamous Makoko slum in Lagos, this is their home.
Every day life for the many fishermen and their families revolves around paddling and rowing through the filthy, oily water in the slum – but this does not stop the young children from beaming when they see a camera.

In July, the Lagos state government began demolishing some parts of Makoko slum. A letter was served on residents giving them 72 hours to vacate their properties. The letter from the Lagos state authorities said the illegal constructions constituted an “environmental nuisance, security risk and an impediment to the economic and gainful utilisation of the waterfront” and undermined the “megacity status” of Lagos.

“Notice is hereby given to you to vacate and remove all illegal developments along the Makoko/Iwaya Waterfront within 72 hours,” said the letter from the Lagos state ministry of waterfront, infrastructure and development.

Several residents then, told the BBC they did not know where they and their families would sleep.

Makoko is one of Nigeria’s best known slums. Many residents are fishermen and some have migrated from neighbouring Togo and Benin.

The settlement is home to thousands of Nigerians. Although some houses were actually demolished in July, there are people who live there. The slum is clearly visible to traffic speeding past on the city’s Third Mainland Bridge each day.

In a bid to improve the lives of the youngsters who live in Makoko, a group led by Kunle Adeyemi hopes to build a three-story school capable of holding 100 students and teachers in the iconic slum.

San Fransisco Chronicle reports that  the school project, which has received notice from international groups, will cost about $6,250 to complete int he slum.

It would be recalled that  in 2010, the BBC did a film titled Welcome to Lagos, which angered the Nigerian government. The film makers were accused of showing Nigeria in a negative light. But despite the anger, nothing has been done to improve the lives of people living in the slum or provide alternative accommodation for them.

It should therefore come as no surprise that the international media continues to portray Nigeria in a “negative light”. If we desire better representation, we should work on it. 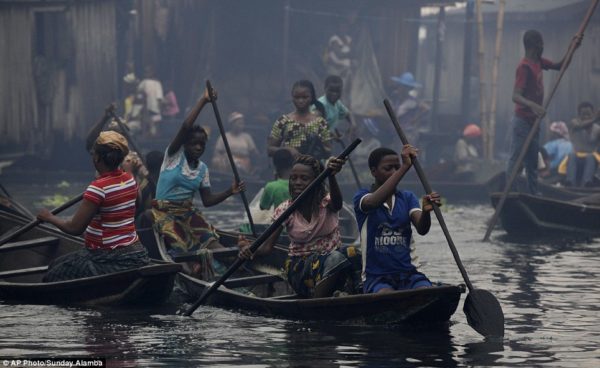 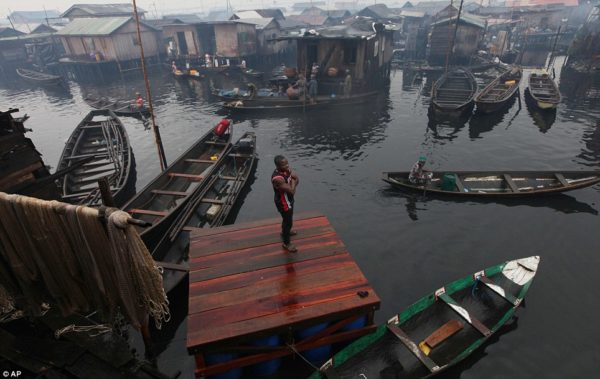