Are You The "Michelle" To His "Barack"? 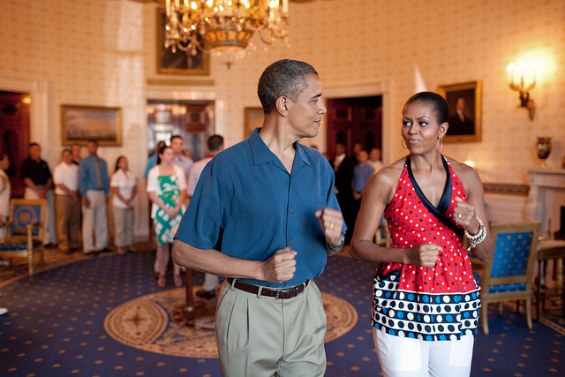 Recently, my friend said  “I don’t like all girls, these days. They’re all funny. They complain about how boys want women to be like Michelle but then attack the boys for not being like Barack. They’re never content. They’re always fantasizing about their ideal men. Why can’t they build these men up? Why can’t they inspire these men to treat them like Princesses?”

I took in her message merely adding “I don’t take all these things serious. Talk is the cheapest thing in the world. Everyone can talk and everyone will talk”.

Barack and Michelle are the quintessential couple. He’s the most powerful man in the world and is a symbol of the fact that the world is evolving to a level where the idea of a black man running the show on a political level doesn’t seem absurd. He captured our hearts while running for the Presidency in 2008. His campaign was the symbol of cool, as seen with his use of the power of celebrity culture. He sparked an interest in politics that the global recession and George Bush had annihilated.

By his side, his wife Michelle complemented him. She fulfilled the stereotype of the strong black woman who is smart, pretty and clever in a way that didn’t leave one wondering why our women tend to be bitchy but inspiring. She worked as hard as her husband on the campaign trail and played a key role in ensuring his ascendancy to the White House. So much so, that so many people believe she’s the more charismatic and powerful Obama.

Whilst Barack was criticized for not being “black” on the basis that by growing up in Hawaii with his white mother and her parents, he had not encountered some of the struggle the blacks have become synonymous with, Michelle dispelled all that and she helped create an air of relativity with the naysayers. She had grown up in a predominantly black area in Chicago to a not so rich family and had been able to earn for herself an Ivy League education at Princeton and Harvard.

There’s a story that relates to them  that has gone viral  that goes as follows: One night President Obama and his wife Michelle decided to do something out of routine and go for a casual dinner at a restaurant that wasn’t too luxurious. When they were seated, the owner of the restaurant asked the president’s secret service if he could please speak to the First Lady in private. They obliged and Michelle had a conversation with the owner.

Following this conversation President Obama asked Michelle, “Why was he so interested in talking to you.” She mentioned that in her teenage years, he had been madly in love with her. President Obama then said, “So if you had married him, you would now be the owner of this lovely restaurant,” to which Michelle responded, “No. If I had married him, he would now be the President.”

Whilst I doubt the validity of the story, it relates to a larger point about the Obama’s relationship. Barack and Michelle came in contact with each other in the summer of 1989 when the Chicago law firm she worked for asked her to mentor their new Summer Associate (Barack).  A relationship that would ultimately consummate in marriage blossomed.

This illustrates a larger problem in the average Nigerian’s psyche. The Nigerian lady does not want to speak or possibly entertain the thought of the man she sees as ‘beneath’ her. Michelle saw some potential in Barack regardless of her temporary superiority. She didn’t think she was too good for him because he was her subordinate. She realized that the superiority was insignificant in the grand scheme of things and was able to rein it in and influence her man to the heights he has risen to. That’s not to say we shall hold her accountable for all of her husband’s achievements.  We can be incredibly shortsighted and fail to take cognizance of the wider picture.  “How much money does he have? Would he buy me Brazilian weave and Gucci bag? Does he have an iPhone or Blackberry?”

We disregard future prospects for the short term. What we forget is that a lot of these factors have little or no relevance in the long run. Perfection is being sought forgetting that the very idea of humanity is to strive for perfection whilst keeping in mind that it is a rarity. We’re concerning ourselves with getting A*’s and A’s without doing the hard work required to get those high grades. Perhaps, our generation would be greater if we decided to focus on more supporting and complementing instead of obsessing finished commodities that are nowhere to be found.

3 Days, 150 Exhibitors, 1 Venue – Don’t Miss the Chance to Showcase Your Business at the Lagos Premium Expo – Kicks off 30th November 2012