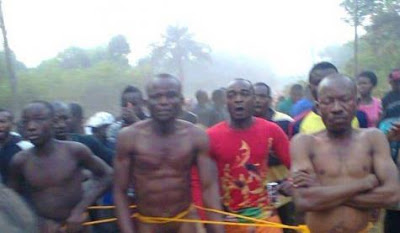 On Monday 14th January 2013, three men were stripped naked and beaten in Ekwe, near Umuka in Njaba Local Government Area of Imo State for supposedly being homosexuals.

The pictures of their ordeal in the hands of members of the community have gone viral, eliciting a range of reactions from Nigerians. Among those who have strongly condemned the action is Steve Aborisade, Founder/Coordinator of the Nigeria HIV Info, a group dedicated to the protection of the rights of people living with HIV/AIDS.

In a letter to Rochas Okorocha, the Imo State Governor, Aborisade said the men were yet to be released from the location where they are being held in Umuka, Njaba Local Government Area of Imo State and called on security agents to quickly respond to their plight.

In the letter titled: Gross Abuse Of Human Rights Through A Homophobic Attack On Three Men In Ekwe Area of Imo State, Aborisade condemned the “inhuman treatment” meted out to the men and said being homosexual does not give others the license to trample on their rights.

While acknowledging that several Nigerians find the practice of homosexuality strange and unnatural, we also realize that it does not confer a license to trample on the rights of people who engages in it, with the sort of inhuman treatment that was meted out to these them.

So many informed commentators, including Nobel Prize winner, Prof Wole Soyinka have commented on the scientifically proven fact that more than anything, gays are just victims of biology.

We note and condemn the prevailing adverse legal and social environment that most LGBT now have to face in Nigeria, being criminalised for their sexual orientation and being made a target for harassment and violent assault fuelled by the on-going debates by the nation’s parliament on criminalizing homosexual acts.

Instead of being singled out for harassment and prosecution, what this community deserves is support and access to sexual health services that they lack as citizens of this country. The LGBT community remain a high risk group to HIV/AIDS infection, yet it is a community that has been denied of all access to life saving HIV/AIDS services. We suggest that our parliamentarians should devote equal energy at fishing out and punishing our treasury thieves who are doing more harm to the continued survival of our nation instead of dissipating energy on an issue that borders on private morality.

We enjoin other rights group to show solidarity and ensure that the rights of sexual minorities are protected like other marginalized groups in the country.