"Only 34 Lions Left in Nigeria" - Lions in Nigeria & other parts of West Africa head towards Extinction! 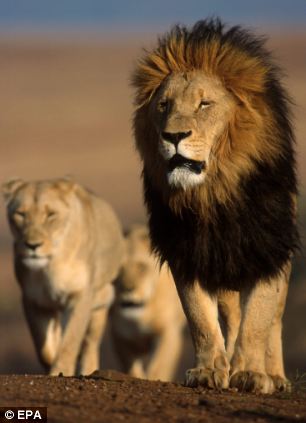 30 years ago, there were 200,000 lions roaming wild across the African continent but now there are only between 15,000 and 32,000 left. Of the lions left, it is a estimated that there are just 645 genetically distinct wild lions left in western and central Africa with “only 34 left in Nigeria“. That is most recent report from leading charity to protect and conserve endangered lions worldwide, LionAid as reported in the UK Daily Mail.

Dr Pieter Kat, trustee of LionAid told the UK Guardian, “There has been a catastrophic decline in the populations of lions in Africa, and particularly west Africa. These lions have been neglected for a very long time and do not have adequate protection programs.

Even though the national parks in west Africa contain very distinct and very important fauna compared to eastern Africa, people tend to ignore that west Africa is a very special place. As a result, the populations in west Africa are declining so quickly.“

Yohanna Saidu, a research officer at Nigeria’s interior ministry confirmed that the number of lions in Nigeria is declining fast! Nigeria officially had 44 lions in 2009 and now 34 lions remain. “We are doing our best to protect our lions but we are very concerned about them” he said.

Dr Pieter Kat confirmed the dire situation – “As a biologist I would say that in a country like Nigeria, which has only 34 lions left, they are already extinct. It’s almost impossible to build up a population from such a small number.“

This is so sad. Nigerians travel to South Africa and Kenya on Safari. That’s great but our wildlife is going extinct and little is being done to reserve this trend.