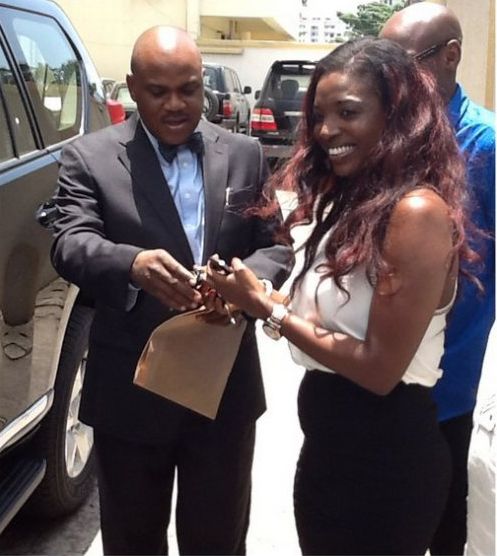 At the traditional wedding of Nigerian music star 2Face Idibia and his wife Annie Idibia last Friday, the Akwa-Ibom state governor Godswill Akpabio announced that he was going to present the bride with a Toyota Prado SUV. He also promised to sponsor 20 of Annie’s relatives to Dubai for the couple’s white wedding.

Although this announcement caused an outrage as people criticized the governor for the expensive gift, he has kept true to his word. Less than one week after the traditional wedding, the state government has presented Annie with the car and released a picture showing the state’s Commissioner for Information, Aniekan Umanah presenting the gift to Annie and 2Face Idibia in Lagos. 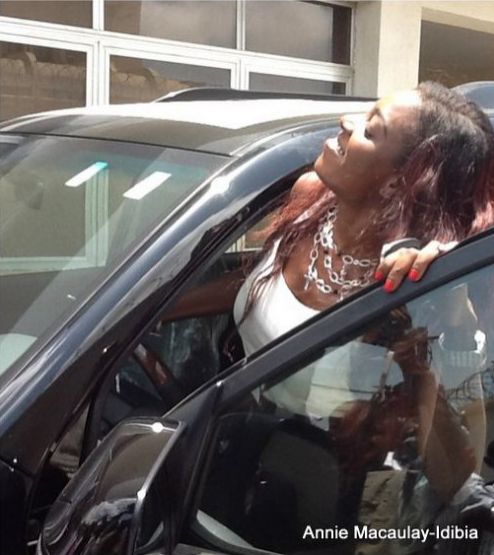 The state goverment has also released a statement defending the gifts and some misleading reports published in the media. The statement by Aniekan Umana released on Wednesday said that Akpabio approved only one car, and not two, for the couple. He also said he only promised to sponsor 20, and not 29, wedding guests to Dubai for the couple’s white wedding. Read the statement below:

“Following spurious and false speculations in the social media concerning the wedding gift by Governor Godswill Akpabio to Mrs. Annie Innocent Idibia, née Macaulay, I wish to state as follows:

That the State Governor as a token of support for the couple promised to fund the traveling expenses (economy return tickets) for only 20 relatives of Mrs. Annie Idibia Macaulay to Dubai, where the couple have chosen to wed.

That looking carefully at the surrounding events in perspective, Mrs. Annie Idibia, nee Macaulay is a daughter of Akwa Ibom State and the gift of a Prado SUV from her governor is only a gesture of love and goodwill. Her resolve to stand by her husband on his journey right from his days of youthful beginnings to stardom even in the face of challenges was commendable and a true attribute of the Akwa Ibom women.

That it is however unbecoming that mischief makers and enemies of progress have decided to inflame the social media with incongruous reports that the State Government is sponsoring an entourage of party supporters to the wedding in Dubai, when in fact the Government is only sponsoring the travel expenses of twenty of her family members at an estimated cost of roughly Three Million Naira (N3,000,000.00) only.

I wish to therefore urge members of the public to discountenance the misrepresentations made out of a well intentioned act of the governor.”

Have You Got An Idea that Can Change Lives? Enter the Rockafeller Foundation Centennial Innovation Challenge & Win $100,000