"Elnathan Was One of My Boys at the Workshop" | Chimamanda Ngozi Adichie's comments on 2013 Caine Prize in Boston Reader interview cause a Stir! 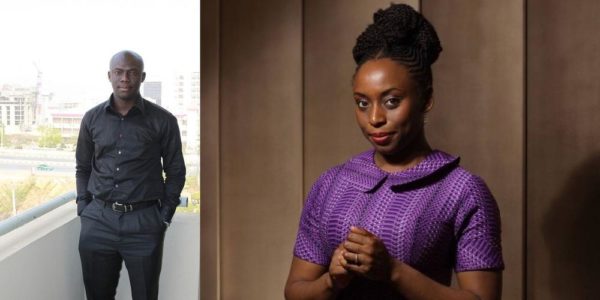 “Elnathan Was One of My Boys at the Workshop” – nine words which caused quite a media circus on social networking website, Twitter a few days ago. On Monday morning, the Nigerian literary world woke up to a certain furor caused by an interview which had been published in the Boston Review.

Nigerian writer and Orange Prize winner Chimamanda Ngozi Adichie had an interview with Aaron Bady in which she spoke about her work, race, her friendship with Binyavanga Wainaina and more. Then she spoke about the Caine Prize for African Writing and her thoughts on the awarding body.

Below is an excerpt of the interview – “The varieties of blackness” with Aaron Bady.

AB: I would love to ask you about the Caine Prize. I find it interesting that so many Nigerians are on the short list this year—that it’s four Nigerians out of five . . .

CA: Umm, why is that a problem? Watch it.

AB: Well, none of them are you!

CA: Elnathan was one of my boys in my workshop. But what’s all this over-privileging of the Caine Prize, anyway? I don’t want to talk about the Caine Prize, really. I suppose it’s a good thing, but for me it’s not the arbiter of the best fiction in Africa. It’s never been. I know that Chinelo is on the short list, too. But I haven’t even read the stories—I’m just not very interested. I don’t go the Caine Prize to look for the best in African fiction.

AB: Where do you go?

CA: I go to my mailbox, where my workshop people send me their stories. I could give you a list of ten—mostly in Nigeria—writers who I think are very good. They’re not on the Caine Prize short list.

Also, you do realize that Nigeria is the most populous country, and we have a crazy, chauvinistic nationalism. So when you say anything bad about Nigeria, we attack you, but when we all go back to Nigeria, we attack each other. That’s how it works. We’re very happy that there are four. Actually, we think all the people on the short list should be Nigerians, because we are born with the natural arrogance of the Nigerians. Of course, what’s wonderful is that there’s nothing to be arrogant about. Nigerians feel very superior to Ghana, for example, but then you go to Accra, and Accra actually works [laughs].

Who’s the other Nigerian on the short list? There’s Chinelo and Elnathan but I don’t know who the others are.

Read the full text of the interview {HERE}

Caine Prize nominee and social commentator, Elnathan John who had participated in the Adichie organized Farafina workshop took to Twitter to express his thoughts on Chimamanda’s words.

Here are some of ElNathan’s tweets

What a depressing week. First I don’t win the Caine Prize. Then I become outed as Amanda Adichies boy. Then I don’t make her own shortlist!

I am sure I have hurt some with the manner I chose to say my truth. Please forgive me. But please don’t take away my right to be upset. — Elnathan John (@elnathan) July 16, 2013

I agree with Chimamanda that there is an over privileging of the Caine Prize. And that the best Nigerian writing is in her mailbox. *sigh* — Elnathan John (@elnathan) July 15, 2013

Then, Elnathan responded to the interview by putting up a new post,”The Consequences of Loving Ngozi” on his blog, “The Dark Corner” where he expressed his disdain for her comments.

Also, here are some mixed responses from his followers on Twitter:

@elnathan , amanda needs some TLC, your book made a bigger splash than americanah, too much hair extensions becloud reason — Mr Olumide 1 (@borie_nla) July 15, 2013

@elnathan Guy u sef need to relax with the yapping. We don hear u. Focus on ur work and let the twitter world do the chimamanda — Naija News (@9janews) July 15, 2013

So no that Chimamanda Adichie has won the Chicago Tribune Heartland Prize for fiction, will @elnathan put another cocoyam in his mouth? 🙂 — Kolawole Oyeneyin (@MrSleevesUp) July 17, 2013

If @elnathan and @Abubakr_khalifa want get angry about her word choice, that’s their business. However, in the context of the interview… — Aaron Bady (@zunguzungu) July 15, 2013

Angry tweets from Abubakar Ibrahim (One of the Caine Prize nominees)

@Abubakr_khalifa @elnathan I’m just saying, you can feel patronized if you want; that’s your call. But… — Aaron Bady (@zunguzungu) July 15, 2013

I suppose now every Nigerian writer to be taken seriously has to have a presence in Godmother Adichie’s inbox. Put that on ur profile. — Abubakar A. Ibrahim (@Abubakr_khalifa) July 15, 2013

So the best African fiction is in Chimamanda Adichie’s inbox? I hail thee, queen-god mother. Go fuck yourself, Chimamanda. Nonsense!

I have my issues with the @CainePrize but I respect it. Adichie & pretty much every African writer of stature I know has applied for it. Yes

Adichie was short listed for Caine in 2002. Didn’t win.“@DoubleEph: What she dislikes about the Caine Prize is the fact that it’s British.”

Finally, this response from Arts & Culture Editor Molara Wood on Chimamanda’s own reaction to being called a “girl”

Concerning Chimamanda Ngozi Adichie’s use of “one of my boys” and the debates surrounding. I woke up this morning and remembered something from my days as Arts & Culture Editor of NEXT and, all things considered, I wish to share it.

Ms Adichie graced the cover of the 16-page weekly supplement I edited at least three or four times, looking stunning on each one – and featured on countless sideboxes, top banners, etcetera. On one of the covers, I wrote a banner along these lines: ‘The Glamour Girl of Nigerian Writing’. Myself and my team meant this as a compliment, but the author did not share that view. I had known her personally for several years, with emails and telephone numbers for two continents, yet Ms Adichie lodged a complaint directly with my bosses at NEXT, who in turn oommunicated her displeasure to me.

It was not so much the word “Glamour”. The author objected to the use of the word “Girl”, especially as she was now over 30. I sent an email to Ms Adichie, copied to my bosses, in which I offered the author my unreserved apologies.

What do you guys think? Was Chimamanda trying to belittle the Caine Prize? Did Elnathan go overboard in his response to Adichie?

It’s the ‘Battle of the Bootylicious’! Watch Toolz Chat with Omotola Jalade-Ekeinde on Ndani TV’s ‘The Juice’