Genevieve Nnaji denies Interview with Yes International! Magazine | Editor says it's Before She was Famous - Read the Full Interview 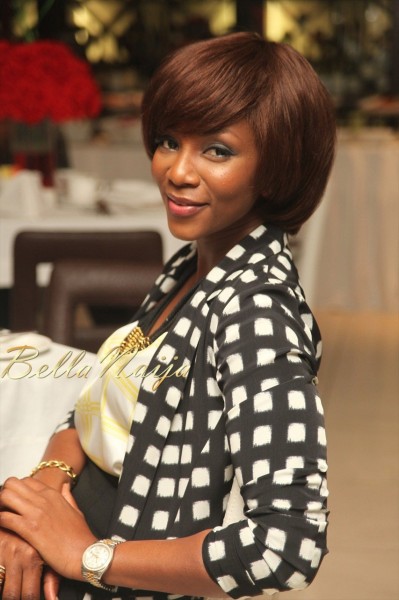 Did she or didn’t she grant the interview?

Today the Nollywood star took to Twitter to state that she didn’t grant the publication an interview. “My Last official interview was with Genevieve Magazine. Anything else is either false or as old as my career.” she states.

The editor-in-chief of the publication Azuh Arinze sent BellaNaija the complete interview. The intro of the feature reads,

Long before super stardom beckoned, I had this innocent but interesting interview with Genevieve Ifunanya Nnaji.

I must, however, confess that I stumbled on the tape again only days back, and while wading through my archives.

I’ve transcribed and extracted some of her candid thoughts which she shared with me. Particularly those I consider to still be relevant. 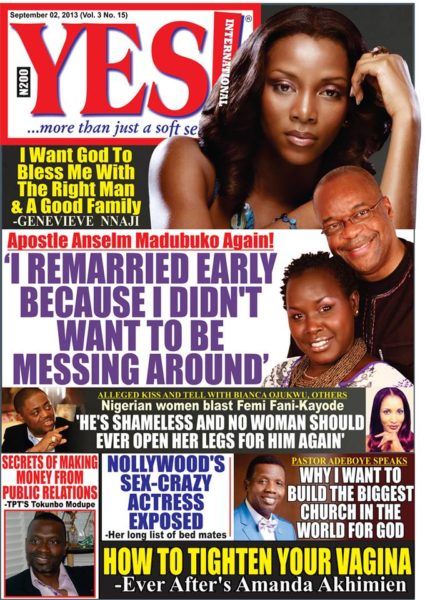 Born on May 3, 1979 into the family of Benedatte and Theophilus Nnaji, Genny, like I enjoy addressing her, hails from Umuebi – Amuzu in Aboh-Mbaise, Imo State. The fourth of her parents’ eight children, she attended Kemstar Nursery and Primary School, Surulere, Lagos; Methodist Girls High School, Lagos and Girls Secondary School, Akwakuma, Owerri, Imo State.

Dazzling and delectable, sumptuous and sexy, sweet and svelte, she is unarguably and indisputably the reigning pride of Africa in the make-believe world.

One of our biggest and richest, the single mother of one (Lily) who has in her kitty some of the most coveted award trophies and to her credit some of the most lucrative endorsement deals poured it all out to Azuh Arinze.

Trust me; you will definitely enjoy this…

How does it feel to have risen this far within so short a time?
(Smiles) I’m trying to handle it as much as I can. It feels fulfilling. I feel I’m having the best of my time. I feel the Lord is with me. I feel I have been able to make an impact on people and I have a lot of fans and I’m enjoying my life. It feels good.

To what or whom do you owe all that?
God’s gift, talent, determination, pride…

What do you like most about stardom because it appears you don’t want to tell us about your love life?
The fact that it opens doors for you is what I like most about it. You walk into a place and every other person is queuing up for one thing or the other, they just start to recognize you. Oh! come in, come in…It’s actually a door opener for us or for me. It has brought respect, especially when you do what you are doing well. What I hate most about it is the price that we get to pay for stardom – negative publicity, the untrue scandals; actually, the only thing I hate about it is the bad press.

What will you say is the worst story ever written about you in the press?
So many bad things. But the one I hated most was the one of Fred Amata and I, which I don’t know where they got it from. It hurt me so much. It was not just fair.

How do you feel anytime you read negative things about your person in the media?
Certainly, I don’t feel good…

What if the stories are true, but maybe you were not expecting it to be published?
It’s rarely been the truth. Maybe a bit of it, but that’s not how it happened. The press never tells the story the way it is. It’s usually a bit from here and a bit from there. For a very long time, they have not written anything true about me…

How did you come into the movie industry?
I have been acting since I was eight in Ripples. That was how I got into acting. For movies, I think that should be 1998 in Most Wanted. I met Torino (Emeka Ojukwu) in a bus and to my greatest surprise, he recognized me, from Ripples, when I was about eight, nine. He asked why I left the industry. He later invited me to this audition – Most Wanted. I got a role, a “waka-pass” and that was it.

But the story we heard was that Kunle Coker brought you in and that both of you even dated?
Yes, Kunle Coker was actually my boyfriend. But he did not bring me into the industry.

They said he was heartbroken when you deserted him. What led to the collapse of your relationship?
Well, relationships come and go.

Are you now saying that apart from Kunle Coker, you have not dated any other person in the industry?
I will not say that and I will not say anything on the contrary either. I don’t think it is your business. It’s my personal life.

What do you find most attractive in a man?
The fact that a man will take me for who I am, not for what he hears or what he believes. I like people who take me for the me they see. That’s the most important thing. And have regard for me. And trust too.

What do you think is the biggest mistake that men make with women?
Everyone makes mistakes. But to me, I will not tolerate any man who hits women. To me, that’s evil.

Do you believe in love at first sight?
I believe in infatuation at first sight. Love is a very strong feeling. It does not just come. People think infatuation is being in love. They are two different things. You don’t know anything yet until you get to meet the person and you begin to fall in love. Not just physically, but externally with the person.

Can you recollect the first time you fell in love?
Yes!

Tell us about it.
I think we met at a show. This was when I was in secondary school and we shared a lot of things in common – singing. It was a case of two compatible people who were so much in love with each other and…

(Interruption) So, what eventually happened?
Like I said, relationships must come and go. You can’t help everything that happens. Some things just happen for no reason.

What’s your definition of love?
Love has to be understanding, caring. Love, to me, is being with somebody for 24 hours without being bored. Love is catching your breath every time you see whoever you are in love with. Love is friendship, love is understanding and love is trust.

Do you believe in being faithful in a relationship?
Yeah! I’m very faithful.

Can you date a fan?
I’ve never dated a fan. And I don’t know if I can. But people come around to toast as per fans. But it’s a matter of nicely telling them off. There are different reasons why fans like or love artistes. So, it actually depends on why my fan loves me. It depends. Although, I don’t think it is advisable to date a fan. The reason being that people are in love with what they see on the screen, not the real you.

What’s your idea of a sensual treat?
Quiet time in a place surrounded by nature, water, trees…less talk, more of feelings, let the feelings show instead.

What part of a man’s body do you like most?
What kind of questions are these?

Must I answer that?
Okay, a man’s chest, from the belly up.

What part of your own body do you like most?
I guess it’s my eyes. I think I like my eyes.

What’s your greatest wish?
That God continues to bless me. Especially with the right man and a good family.

It’s like you are too eager to get married?
No, no, no. The thing is just that there comes a time in your life where everything is going fine. And all you say to yourself is after this, what next? After everything, you have to get married as far as you are a woman.

What are your hobbies?
Singing, dancing…

Let’s have your bio-data. People don’t seem to know much about you?
I’m from Aboh-Mbaise in Imo State. I went to Kemistar Nursery and Primary School, Surulere; Methodist Girls High School, followed by one in Ikeja. I kept on moving. But ended up at Girls Secondary School, Akwakuma in Owerri, Imo State.

Why have you not furthered your education?
Life is not the same for everybody. Some people are so lucky, they come out of secondary school and they go straight to university because they have the back-up of people and it’s so easy. It looks simple…mine was different. But I’m determined. Definitely, I’m gonna go back to school. I wanted to make money, I love my money, I cherish my own money. So, I will go back when I’ve made enough. But even while I’m there, I won’t stop working.

Tell us about your parents, what do they do?
My parents are there. My mum is a teacher and my dad is retired.

What was your dad into before his retirement?
He was a bank manager with African Continental Bank (ACB)…I’m the fourth of eight children, the third girl. We are four girls, four boys. I come from a very strong Christian family. And I think that has been able to have an effect on my life, especially since I came into the industry. You see, even when people go out to say all sorts, my mother knows the kind of daughter she has. She knows the limit that I can go.

She must have been devastated when you took in, in your teens?
Well, well…I think so.

What was your childhood like?
My childhood was fun. It was fun. You don’t get to get all that these days.

What’s the greatest complement that has ever come your way?
My complexion.

The BellaNaija team got in touch with the publication and they released this statement;

Like we professionally stated in our intro, it’s an old interview she had with our Publisher/Editor-in-Chief, Azuh Arinze, years back at Oceanview Restaurants, Victoria Island, Lagos. He only stumbled on the tape again and reproduced it. Above all, we still have the tape of the interview as well as photographs taken on that day.
Thanks.
Desmond Ike-Chima
For Yes International! Magazine