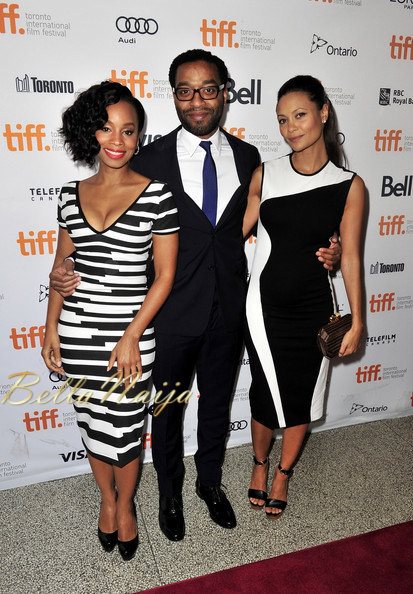 You’ve been waiting for it, now it has finally premiered.

On Sunday 8th September 2013, Half of a Yellow Sun – the movie adaptation of Chimamanda Ngozi Adichie‘s best selling novel premiered at the 2013 Toronto International Film Festival.

The premiere which took place at the Winter Garden Theatre, Toronto, Canada, saw the stars as well as the crew of the anticipated production. 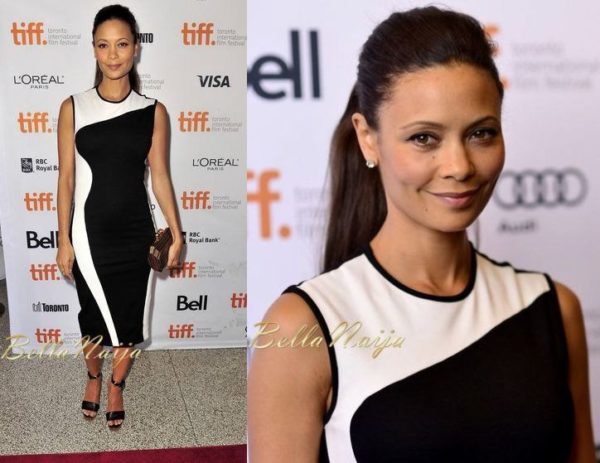 Hollywood star Thandie Newton who plays Olanna in the movie, looked simple and chic in a white-and-black bodycon dress by Stella McCartney.

The actress who is expecting her third child with her writer/producer husband Ol Parker, accessorized with diamond stud earrings, a Stella McCartney marbled acetate box clutch and a pair of black ankle strap heels.

I love the easy chic vibe Thandie is oozing. Jumping on the barely-any-make-up-there trend, she completed the look with a sleek ponytail.

Nigerian-Hollywood actor Chiwetel Ejiofor wore a navy suit, a blue tie, a white shirt and black shoes. But Chiwetel’s most stylish accessory was his date.

The mystery lady who was also at the premiere of 12 Years a Slave with the actor (Click here for photos), wore a black velvet dress, a black clutch and black sandals.

When I thought all the female guests decided on black or white coordinated looks, Chimamanda brought some colour to the red carpet.

The author of the best selling book Half of a Yellow Sun, showed off her curves in a yellow peplum top, which features a subtle dramatic shoulder detailing and a rich red fabric under the peplum, and a matching yellow skirt. 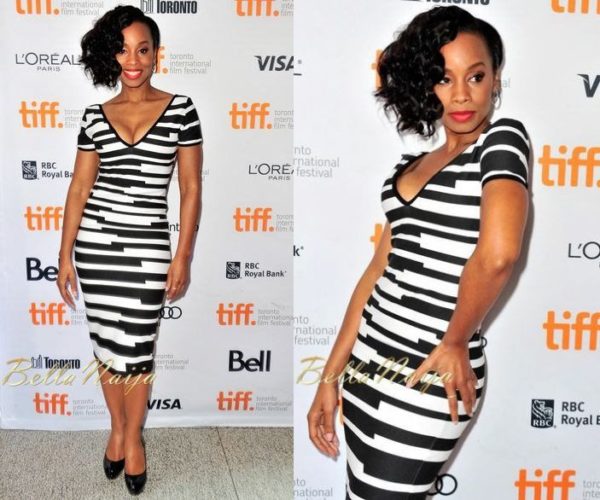 The beautiful petite actress served us her best red carpet diva attitude in a form fitting Hervé Léger dress. The dress which features a generous décolletage, was simply styled with silver earrings and black pumps.

Her look was picture perfect with red lipstick and short wavy lock styled to the front.

Veteran musician/actress Onyeka Onwenu was one to watch out for on the red carpet.

The Glo X-Factor judge was all smiles on the red carpet in a black velvet blouse which features, gold studs and gold velvet fabric, black pants and black heels.

Also rocking her signature dark shades, she finished the look with a black clutch and a silver bracelet. 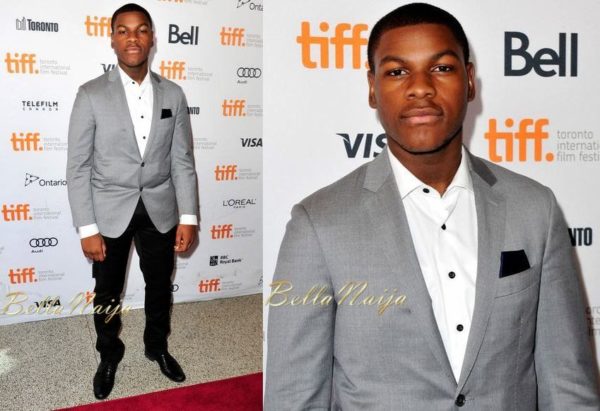 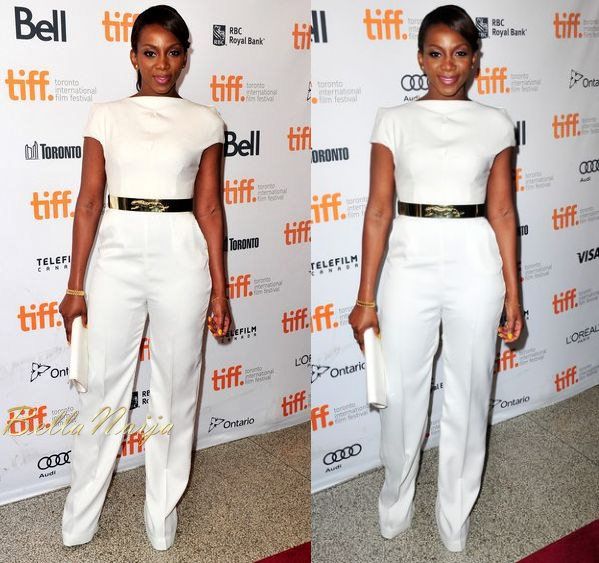 It’s Genny. The Nollywood star made her big debut at the 2013 Toronto International Film Festival on Sunday evening.

As I said in the last feature of Genevieve’s outfit (Click here to read), I wish she arrived in a major frock as this was her huge Hollywood debut.

But her Andrea Iyamah white jumpsuit wasn’t a disappointment. The high neck piece which features short sleeves and long pants, was styled with a white clutch, a gold belt to accentuate her waist, gold stud earrings and gold bracelets.

For beauty, Genny opted for a sleek ponytail with a side fringe, smokey eyes and pink lipstick.

HOAYS producer Andrea Calderwood opted for a sleeveless black LBD with a scoop neckline, a black clutch and black heels.

Tokini Peterside was also at the premiere. She wore a grey dress, black heels and a gold necklace. 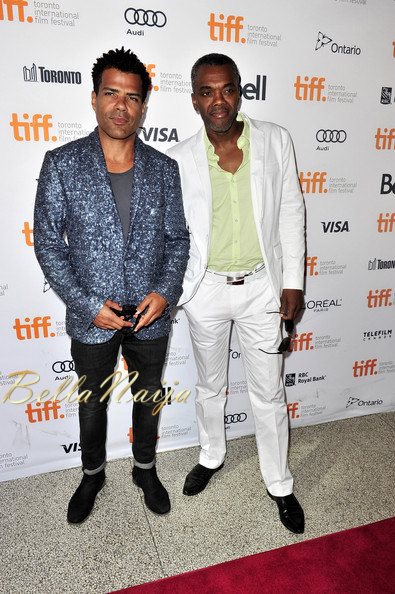 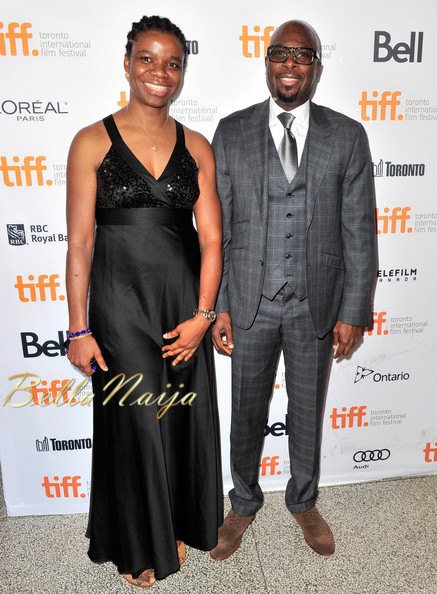 Yewande Sadiku and Tunde Folawiyo are the executive producers of the movie. 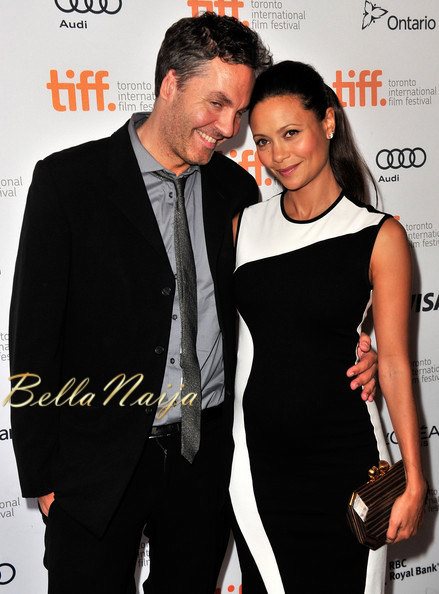 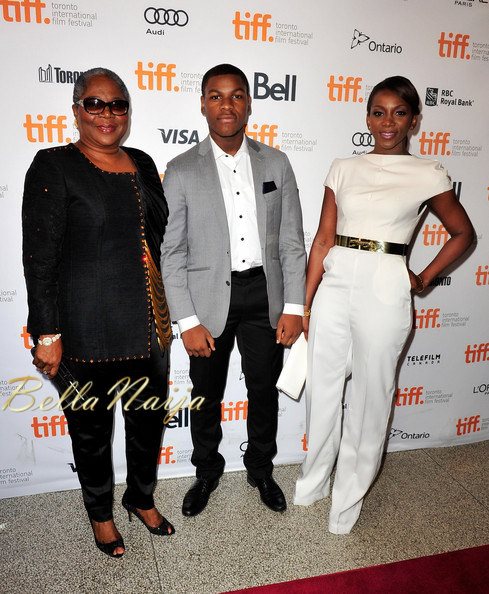 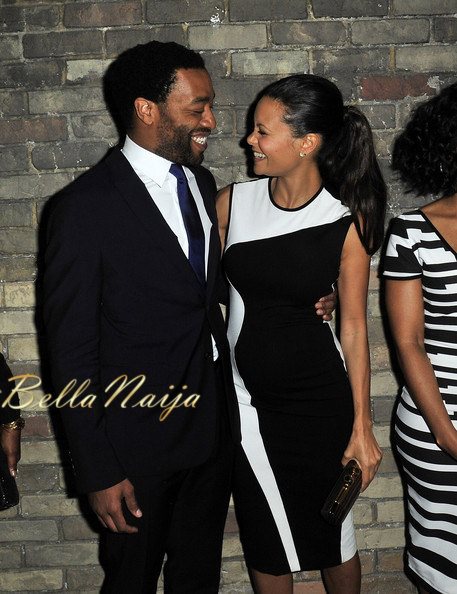 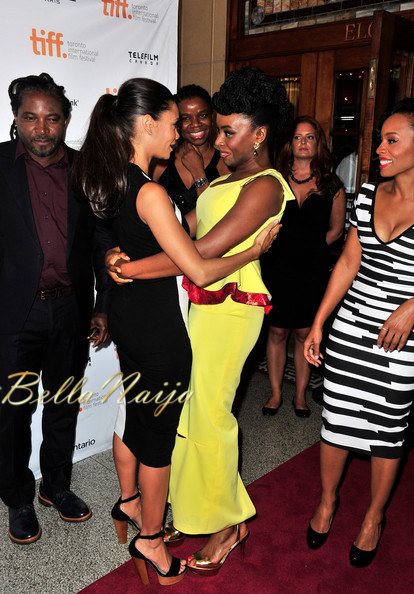 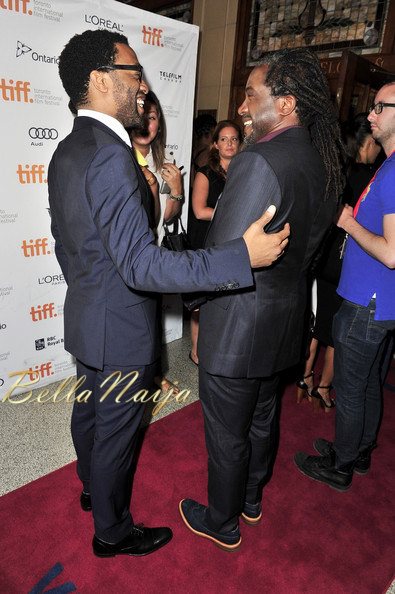 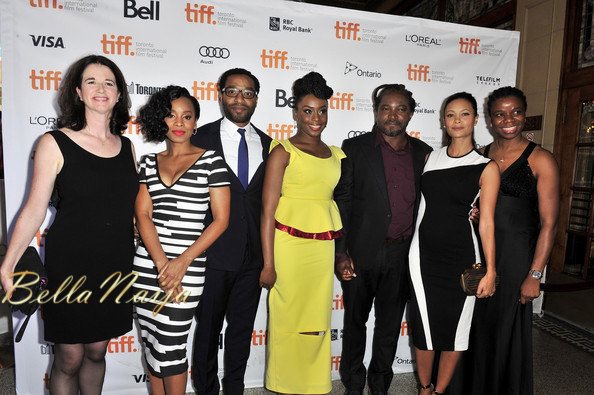 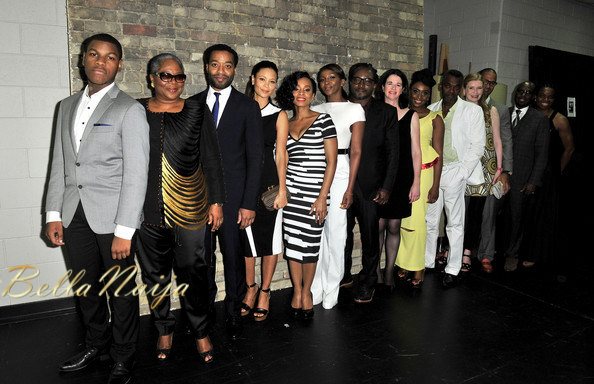 Who’s Going to Save Gbogbo Bigz Girlz?! Funke Akindele stars in the “Flood with Love” Campaign