Gov. Rotimi Amaechi: "The Problem is We Have Chop, I Chop Institutions in Nigeria" | Exclusive Excerpts from Mode Men's Oct/Nov Issue 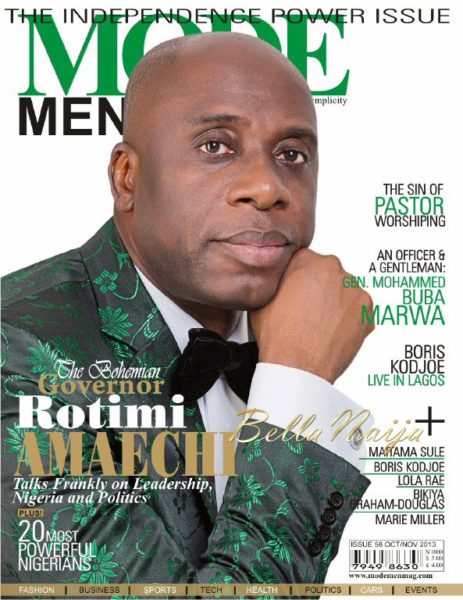 Looking sharp in a grey blazer with green embroidery, a white shirt and black velvet bow tie, he speaks candidly on leadership, Nigeria, family and politics.

BellaNaija.com has exclusively obtained excerpts from the interview. In August, the very out spoken Governor boldly aired his views on Nigerian politics on BBC’s Hard Talk (Click here to watch). Once again, he is saying it like it means it.

You don’t command forces against citizens. It should be against other nations. Institutions in Nigeria are personalized. It’s the same thing with the PDP.

On quitting politics for his children – I would like to quit politics to spend time with my children, but they tell me “Daddy, it’s too late. We are all grown up now. Don’t quit because of us. If you want to quit, you can; but we shouldn’t be the reason”.

On plans after retirement – When I retire, I will become a farmer or teacher, but first I will go to school to get qualifications to teach.

The full interview is available in the new issue.

What Are Your Thoughts on Arranged Marriages?

Throwback Fever! Check Out Photos of D’Prince Before He Heard the “Booty Call”