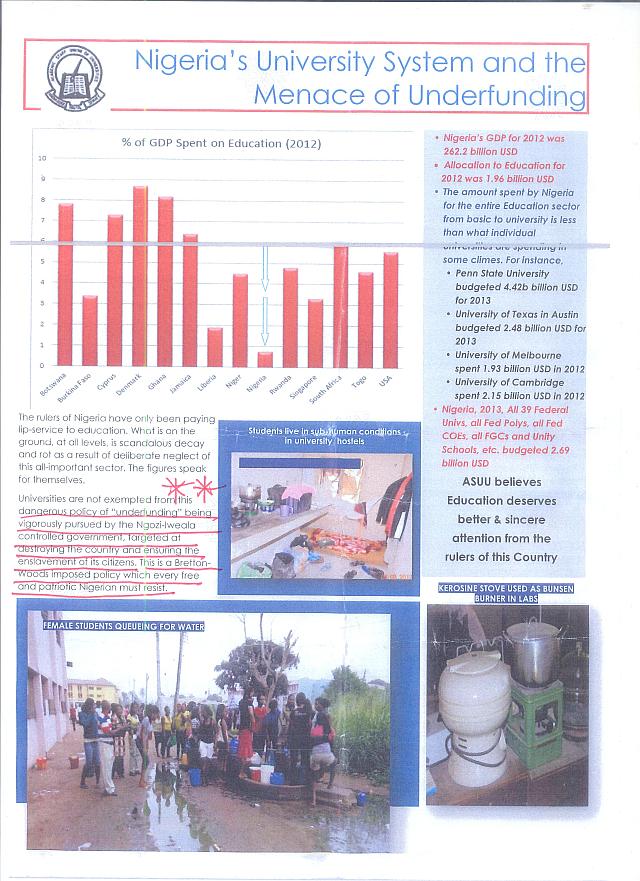 With the ongoing Academic Staff Union of Universities (ASUU) strike wrecking havoc all over Nigeria, fingers are being pointed on who is to blame. Over the last few days, pamphlets have been distributed in Northern Nigeria including accusatory statements directed at the Coordinating Minister for the Economy and Minister of Finance, Dr Ngozi Okonjo-Iweala role in the ASUU strike.
The Minister’s office has released the following statement to clarify its position.

**
Contrary to some recent media reports, the Federal government has not adopted a take-it-or-leave-it approach in its negotiations with ASUU. Rather, the approach is focused on positive engagement and achieving sustainable solutions to the challenges facing higher education in the country. That is why President Goodluck Jonathan recently appealed to ASUU to respond to government’s positive steps by calling off its strike in the interest of suffering students and parents.

Despite this, for several days now, some elements in ASUU have been distributing pamphlets and flyers with abusive and inflammatory messages against the Coordinating Minister for the Economy and Minister of Finance, Dr Ngozi Okonjo-Iweala in mosques and other places. This is taking academic unionism to a new low and infusing it with unnecessary politics. I am sure majority of ASUU members are not in support of this.

These messages are directed at using falsehood to demonize the Minister as callous and unsympathetic to the plight of students and parents. The major lie being peddled in the pamphlets and flyers is that Dr Okonjo-Iweala has insisted on a “take-it-or-leave-it approach” in the negotiations with ASUU. Nothing could be further from the truth.

Dr Okonjo-Iweala is the daughter of two retired professors and her father is presently a member of ASUU’s Board of Trustees and has been one for a long time. She speaks with her father everyday on the issue so how can be insensitive to issues concerning the sad state of tertiary education in the country? She understands and sympathizes with the plight of both students and lecturers. She wants our children back in school as soon as possible. Remember she is a mother and two of her young relatives are sitting at home due to the strike.

This is why government is working hard, under the leadership of the President, to seek practical and sustainable solutions to the challenges facing higher education in Nigeria. The President has made available N100 billion a year in the first instance to repair hostels, laboratories and classrooms and other facilities. An offer has also been made to ASUU of N30 billion towards their earned allowances. In fact, negotiations have even gone further than this. This is the first time, in years of negotiating with government, that significant sums of money have been put on the table for ASUU and universities on this particular set of issues. The Coordinating Minister is fully part of this.

Against this background, ASUU elements who want the strike to continue should have a heart and rethink their current take-it-or-leave-it approach to negotiation. Government has demonstrated its commitment to improving the university system. And it is even ready to do much more going forward. ASUU should listen to the voice of reason and the yearnings of Nigerians on this issue.

Related Topics:Ngozi Okonjo-Iweala
Up Next