Ayo Sogunro: To Speak to An American Blonde About International Affairs, Press '1' Now 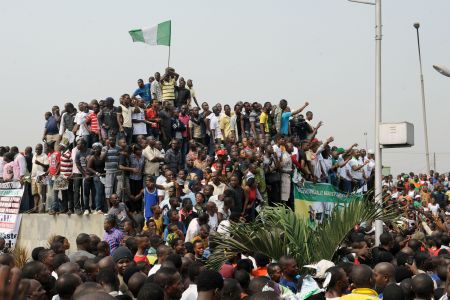 Editor’s Note: Ayo Sogunro’s piece is a rejoinder to Anne Coulter’s article titled “TO SPEAK TO A NIGERIAN PRINCE ABOUT YOUR HEALTH CARE, PRESS ‘1’ NOW” {Click Here to Read}
In a comical confluence of America’s two most fundamental issues–freedom of expression and insane tolerance of idle celebrities—this week we, Nigerians, found out that a significant commentator on critical social issues on behalf of hundreds of thousands of American citizens is a woman conventionally regarded as “a dumb blonde”.

Nigerians already know that Paris Hilton and these other celebrity blondes have already been exposed as lacking vital components of human knowledge, therefore limiting them to entertainment only. However, we are now dumbfounded that these uninformed celebrities also comment on vital issues of American public policy. Nigerians, and citizens of other countries, would be eternally grateful if the American Department of Health and Human Services, and indeed, the entire American public, screens out these 19th century commentators with a good, old-fashioned “STFU” before allowing them to broadcast their opinions to the world. (But rest assured: if a country’s national dignity is eroded as a result of these abnormal commentaries, no one will be more upset about it than the American public.)

It’s a blessing to America, after all, that the conservative sector ratings have crashed even more than the Obamacare website any time these uninformed commentaries are broadcasted to the public.

In fact, call right up and request advice on public issues touching on international affairs from any one of these folks! What could go wrong?

If you call today, you can book Ms. Coulter for a speech and learn from an American blonde who’s willing to share her limited knowledge of international society with you in exchange for a bank account transfer. She’ll tell you all you need to know about immigrants in general, and Nigerians in particular, from her copy of Heart of Darkness.

Which reminds me, immigrants and foreign policies have long been a prime target for these “public interest” scam commentators and conservative con-artists.

Wherever there’s a government program, there’s a gigantic opportunity for self-aggrandizement by these fellows. A fair percentage of social commentators scamming the American public are only interested in the books they sell and the marketing buzz they generate—a much more deeper concern for them than Medicaid or Medicare fraud.

Thus, Ann Coulter, in her own statements, has admitted that her views do not pretend to being balanced or fair—as long as she keeps getting the money she makes off the American public, she might have added. The lady is simply interested in making money off the American people—for contributing absolutely nothing to the public. Just take a look at the Ann Coulter website, we have:

“Never Trust A Liberal Over 3. Autographed First Edition” a book that is priced at US$28, coyly looking for buyers, in the finest tradition of desperate writers everywhere.

“She is a frequent guest on many TV shows, including Hannity, Piers Morgan, Red Eye, HBO’s Real Time with Bill Maher, Fox & Friends, Dr. Drew, Entertainment Tonight, The Today Show, Good Morning America, The Early Show, The Tonight Show with Jay Leno, Hannity, The O’Reilly Factor, and has been profiled in numerous publications, including TV Guide, the Guardian (UK), the New York Observer, National Journal, Harper’s Bazaar, The Washington Post, The New York Times and Elle magazine.” And you can almost hear the webpage groaning at this elaborate name dropping, job-seeking resume.

Those are statements from Ann Coulter’s website. Autographs, speeches, interviews. Marketing for doing absolutely nothing. And she wonders who constitutes the liability to the American economy?

Do you notice anything that stands out about this marketing list? This is the kind of profile you will expect from a door-to-door hack salesman clobbering through the American southeast seeking an uneducated and ignorant clientele. She’s quite the public scammer, this one. And even if she lays claim to being a native-born crook, it’s quite certain that her ancestors were soot-faced labourers exiled from a European farm, probably for stealing farm implements.

Benjamin Franklin may not have recognised African names—he wasn’t that gifted—but, at least, he must have known what a “Coulter” was: a common farm implement.

Ann Coulter is certainly farming for publicity. Enormous, unwieldy, corrupt American government programs run by arrogant bureaucrats are bad enough for the Americans, but Ann Coulter and her ilk, milking American credulity, are even worse. But after decades of Americans paying for the upkeep of Ann Coulter and these other “public speakers”, one can’t help noticing that Medicare and Medicaid are beckoning Disneylands for these native-born social parasites.

But the problem isn’t their social commentary; it’s their ignorance and indolence. In Nigeria, we think only intelligent and reputable people get to lead public opinion. That’s not true in America!

America, for example, leads the world in “public speakers,” a job description just about as close to “unemployed” as one can get. Every level of American society is run amok with these creatures, with the smart ones getting money from international audiences, the mid-range ones getting national attention on Tea Party platforms, and the stupid ones spouting hate messages on the internet. At American universities, you can graduate with a degree and still be as oblivious as Ms Coulter. The University of Lagos would have done the lady much more good.

Now, let’s talk about Nigerians, the latest target of these conservative public speakers. It is irrelevant when any ethnicity—apart from the natives—started to settle in America. After all, there were only a few Caucasians in the Americas until the late 1600s. However, if there are nearly 250,000 Nigerians in the US today, then the US has benefited more from that relationship than has Nigeria. From the 1970s when the US was eager to lap up Nigeria’s economic oil boom till today: these Nigerians—as well as other Africans—have distinguished themselves in sports, science, business and the arts. They contributed positively to the American economy until a conservative white president grounded the economy and a black president had to take over!

Of course, Obamacare never would have passed without the massive economic degradation of the Bush administration. But instead of opening their minds about their own problems, these conservative “public speakers” are seeking to blame American problems on Nigerians—a tactic that they have consistently used in the past. Nigerians are not concerned about Obamacare: it’s failure or success is, to put it mildly, irrelevant to us. But conservatives don’t change their minds—they only change their scapegoats. In order to bash Obamacare, Ann Coulter and her friends had to bring in the Third World to shoulder the blame, displaying their crass ignorance of foreign relations and exposing the American public to international ridicule.

The downside is that America is now chock-full of people who, instead of looking inwards and understanding what America stood for—a cultural melting pot—prefer to cast away all national responsibility and blame others for their affairs. If the thought pattern of Ann Coulter and her specimen is anything to rely on, Americans are like a whining child, ready to blame everyone else for their problems.

Only a good knock on the head can reform such a mentality. I sure hope these parasitic American “public speakers” have Nigerian-style entrepreneurship, and are very keen on getting off their podiums and attempting an honest day’s job for once!

Nigerians are now aware that a certain Ann Coulter is the Paris Hilton of American politics, we’re just astonished that such a job description exists in the first place.

Ayo Sogunro is the author of The Wonderful Life of Senator Boniface and other Sorry Tales. A lawyer by profession, he also indulges in quasi socio-legal philosophy on www.ayosogunro.com. You may interact with him on Twitter via @ayosogunro.