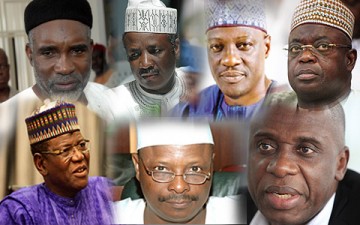 Say hello to the new members of the All Progressives Congress.

Today Tuesday 26th November 2013, the governors held a meeting with the APC leaders in Abuja. The decision was “aimed at rescuing the country” reports Punch Newspaper.

Present at the meeting was the former Governor of Lagos Asiwaju Bola Tinubu and former Head of State Maj. Gen. Muhammadu Buhari.

BellaNajiarians, let’s know what you think.

Ouch! Wizkid’s Fan Thrown Off the Stage for Trying to Hug Him at a Concert in Accra | Watch the Clip

May I Have your Attention Please! #TheGrooveIsComing – Join the Conversation on Twitter