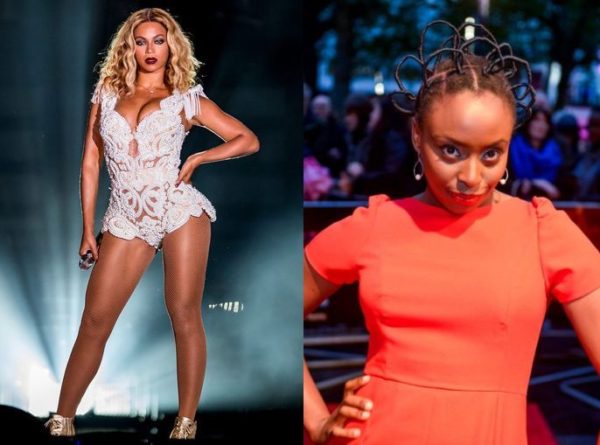 Let’s file this under – “while you were sleeping”.

Nigeria’s very own – esteemed author Chimamanda Ngozi Adichie features on track 11, called Flawless, that starts with a snippet of track Bow Down, before transitioning into a rousing feminist speech by the author, then the new song.

For the video treatment, the author didn’t make an appearance.

“We teach girls to shrink themselves, to make themselves smaller

We say to girls – you can have ambition, but not too much

Because I am female I am expected to aspire to marriage

But why do we teach girls to aspire to marriage and we don’t teach boys the same?

We raise girls to see each other as competitors not for jobs or for accomplishments,

Which I think can be a good thing

But for the attention of men

Feminist: A person who believes in the economic, social and political equality of the sexes.”

What a rousing message! Our only gripe though? Chimamanda’s name is misspelled on iTunes – Adichie is missing the second ‘i’ (see photo). Hopefully they correct it before the day runs out.

Have you heard the new track/album? What do you think?!

It’s the only Way to Party! Get a VVIP Experience at Rhythm Unplugged 2013 with the Xplore First Competition