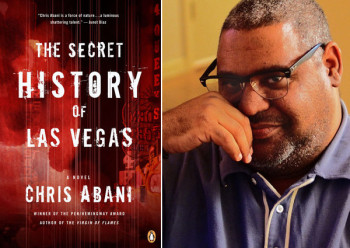 Books have their destinies. See if this book is destined to have you as its reader.

Don’t mop around all weekend, staring at your Kindle or Ipad without a clue what novel to read. Head to Amazon and download Secret History of Las Vegas {here} a new crime thriller by the Nigerian novelist, Chris Abani. It’s a heart-thumping thriller. Trust Abani of Graceland fame to load up enough drama and plot twists to get you through in lightening speed.

Oh, and don’t be fooled by the title into thinking the novel is purely American. It might surprise you, but as one of the characters in the novel observes, “Vegas is really an African city.” Besides, the novel features African characters. For people who care about such things, Secret History of Las Vegas is a proper African crime thriller.

Anyway, on to the juicy synopsis—

There are three main characters you want to keep an eye out for: Sunil Singh is a mixed-race South African psychiatrist—half Indian, half Zulu. During Apartheid, he worked in an institute notorious for experimenting on humans. Apartheid may have ended, but people like Sunil are never out of work for too long. There is always someone devilish enough to require their skill-set. When the story begins, a prestigious research institute has brought him to Las Vegas to work on a project funded by the US military—to produce a drug controlling psychopathic behavior for humans.

It just so happens that when Detective Salazar discovers body dumps of murdered homeless men in the city, he calls Sunil to help him figure things out. Salazar has arrested a co-joined twins—named Water and Fire—found hanging around the crime scene. The twins are scary and mysterious, but they’re also adorable. Water is tall, drop-dead gorgeous and mellow. His brother, Fire, who is attached to his chest, is a blob of flesh sprouting two hands, but he is as feisty, talkative, and charming as a talk-show host. But Salazar doesn’t trust them one bit. He is convinced that they are either responsible for the body dumps or hiding something just as bad. But it doesn’t take long for the story to spin out of control as Sunil, Salazar, and the bizarre twin are drawn deeper and deeper into a dark, twisted tale of gruesome murders, freak shows, haunting desert ghost-towns, fatal betrayals, prostitution, forbidden love, and government conspiracy.

Abani brings his storytelling A-game, so the novel is bound to get you hooked from the start. For those of you who just want a deliciously dark novel with dizzying plot twists, click on that download link and start reading. But feel free to dig deeper into the story for larger meanings, if you care about such things. We all know and love Abani for his novels, but the guy is also a brilliant thinker. Dude can philosophize for days. So while Secret History is straight up fun to read, if you’re hankering for deeper meanings about politics and history, there’s enough layers to unravel.
Download Secret History of Las Vegas {here}

Mz Chizzy: Loving The One Who Got Away