#BringBackOurGirls: To Say or Do Nothing Is Insensitive & Inhumane 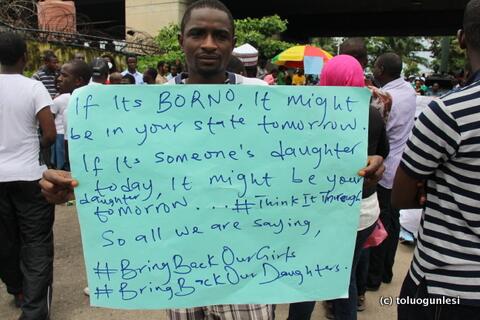 About a week ago, I was having a conversation with my mum, I asked her “mum, where do we start from? Where do we start from in solving the numerous unending problems of this nation? The answer is I really do not know. I have tried to be positive (I still am) and patriotic, but sometimes we have to draw the line when the state fails.

Over 1,500 Nigerians have been killed in the first 3 months of this year in over 42 attacks a source reveals, as a result of insurgency and counter-insurgency measures by the military,  numerous accounts of cattle theft, the bloody May 10th Nyanya bombing that claimed over 70 lives in the nation’s capital, ten months polytechnic teacher’s strike and presently, the abduction of these school girls. Statements like “the Federal Government has condemned the abduction of the girls and vows that the culprits will pay” were repeatedly reported by the press.  After condemning their deeds, what valid actions were taken against it? There was a time I was literally scared to read the news to avoid starting my day with another “bloody news headline” in my head.

Sources confirm that the Boko Haram sect is not faceless as they make us believe. These girls were actually seen by protesting women, who were brave enough to go in search of the girls with some military troops, but were persuaded to return back to their homes for their safety with the faith that the soldiers will invade the camps and rescue the girls, but nothing was done after that. Questions on the mind of many is what is the brain plan behind the actions of the Boko Haram sect?

A report revealed that the Boko Haram found it strategic to keep the girls to save their camps from bombardment by the Nigerian military troops, using the presence of the innocent girls in their camp as defense . Imagine the trauma the parents and guardians of those school girls experienced on the 14thof April after they heard the news that over 200 students were abducted from the Government Girls Secondary School in Chibok area of the north-eastern state of Borno, Nigeria. Two weeks later and these women are yet to get concrete information on the whereabouts of their daughters.  Just when we were making some progress with girl-child education and recorded increments in school enrollment rates in the Northern part of Nigeria, this happens.

On the 30th of April, hundreds of women marched the streets of Abuja, Nigeria protesting for the rescue of the missing girls. A mother of one of the victims in a tearful mood said

These girls are currently rumored to be sold to the fighters for early marriage for a token of 2000 Naira ($12) or smuggled out of the country, their fate, totally unknown. Ironically, at the same time, political parties are holding ‘peaceful’ congresses nationwide in preparation for next year’s election amidst the trauma going on. What happened to basic social responsibility and being your brother’s keeper? How can a human being with a functioning heart not be concerned about the fate of these missing girls and the trauma and uncertainty the mothers are facing?

It is such a shame that we have not only aired our dirty laundry for the whole word to see, but we actually have more faith in international organizations and other nations of the world to help us than the government that was put in place for us. Please sign this petition here to take action against this.

To say or do nothing about this is to be insensitive and inhumane. This is our collective responsibility.