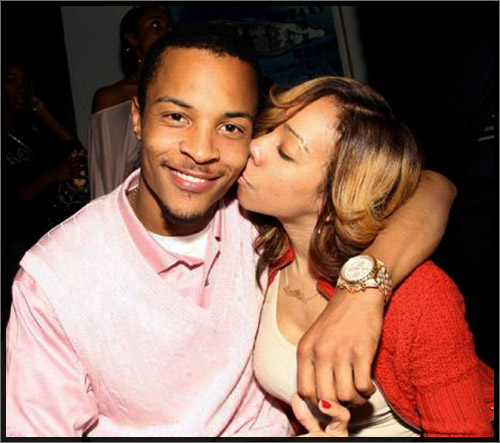 Boxing champ Floyd Mayweather is shutting down reports that he and rapper T.I got into a fight because he was sleeping with Tiny.

On Sunday, T.I allegedly ran to meet Floyd at a Fatburger Restaurant in Vegas, to confront him about having an affair with his wife.

T.I and Tiny have reportedly been having marital issues and were rumoured to contemplating divorce.

Floyd revealed exclusively to Necole Bitchie that he didn’t sleep with Tiny.
On his relationship with Tiny
“I been knowing Tiny before T.I. I’ve never slept with her, I never kissed her, never touched her in no inappropriate way. Her friend Shekinah wanted to come to the [May 4th] fight, she brought Tiny with her. They came to the fight.

After the fight was over Saturday night, Sunday they came over my mother’s house. My mother had a big, big party for me. They came over and showed love. They came over to my house all cool, all respect. Hang out with The Money Team, my crew. Everybody was cordial. No disrespecting type. After that, I guess she put a picture up on Instagram of her at the fight so I guess he [T.I.] was feeling some type of way”

I’m not sleeping with that girl [Tiny] and I told that man before. But if I was, talk to her about that, don’t talk to me about that. But I’m not going to be disrespectful because I’m not going to sleep with a married woman. Now if she was divorced…I still wouldn’t do that because I’m cool with her and we have a real cool and cordial relationship and sometimes sex can mess a good friendship up. And basically, I don’t want to f-ck up a good relationship that I have with a person. So whatever I said, “stole your b-tch…take your b-tch” or whatever, I apologize to Tiny and all of her children and T.I.’s children for saying that. I want to apologize to the children and Tiny and Tiny’s family for saying what I said.

As far as him swinging on me, I ain’t having that. You see me. I’m out all night. He didn’t make an appearance so let’s see how his face look.”

TMZ.com caught the brawl between Floyd Mayweather and T.I in Vegas