Lupita Nyong'o: "The Red Carpet Feels Like a War Zone" 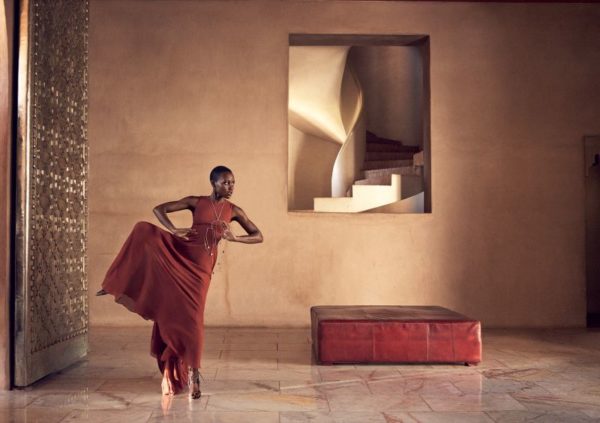 Lupita Nyong’o was a breath of fresh air when she debuted on the scene to begin promoting Steve McQueen‘s 12 Years a Slave. It was not just about her lovable smile but her red carpet choices.

Couture after couture, she won our hearts.

Rocking the cover of Vogue America for its July 2014 issue, she speaks on break out year, winning the Oscar, her new roles, and being the face of Lancôme, as well as her red carpet style.

Read excerpts;
On fully realizing she is now a celebrity: “I felt how valuable and vital such representation is. It just feels like the entertainment industry exploded into my life. People who seemed so distant all of a sudden were right in front of me and recognizing me—before I recognized them!”

Recalling an incident at an airport, she said, “For a split second I looked behind me to see who they were flashing at—and it was me!  That was, I think, the beginning of the end of my anonymity.”

On selecting red carpet dresses: “It’s a job; it’s work, you know!. We’d just try, try, try, try, try, try, try. At first it was very daunting, but I ended up really having fun with it…especially for the bigger awards, the dress let me know it was going to be worn. It’s quite scary when you fall in love with a dress, because it’s nothing to do with your brain. It’s like a gut reaction.”

On her fashion marathon: “Everyone said, ‘Brace yourself, Lupita! Keep a granola bar in that clutch of yours!’ I didn’t really understand what they meant, and it was only once it was past that I realized that my body had been holding on by a thread to get through this very intense experience. Nothing can prepare you for awards season. The red carpet feels like a war zone, except you cannot fly or fight; you just have to stand there and take it. I hope they don’t make that the big quote! Because that would be sad! Tell them not to do that!”

On her role in 12 Years a Slave: “I was really nervous about seeing myself in 12 Years a Slave because it had been such a profound experience in all ways. I remember it being one of the most joyful times in my life—and also one of the most sorrowful. I didn’t want my experience to be a vain one. But I will say that when I watched it, my heartstrings were pulled so tight for Solomon that I couldn’t go into the ego trip. I cried—I mean, I was inconsolable. I wept for an hour after the movie.”

On her Oscar win: “I had already gotten the nomination, which was truly, truly astounding, and enough. Even in my dreams of being an actor, my dream was not in the celebrity. My dream was in the work that I wanted to do.

And when her name was read out she said it was “very confusing, very numbing. I was just repeating my name in my head, so I didn’t know whether I had said my name or they had said my name! And then my little brother screamed, and time was suspended and it was just noise in my head.”

“People are still filling me in on what happened after. My mother says I cried during the speech; I don’t believe her.”

On Chimamanda Ngozi Adichie’s Americanah: “The book blew me away. This was a project I wanted to work on, and I pursued it with all my being. It’s an unabashedly romantic book, really inspiring and uplifting. I found myself in her pages.”

The publication also confirmed her relationship with Somali-born rapper K’naan. He is famous for composing “Wavin’ Flag” that became the official 2010 World Cup song.

Abacha’s N32.5Billion Loot to be Returned by Liechtenstein