Dora Akunyili to be Laid to Rest on August 28th 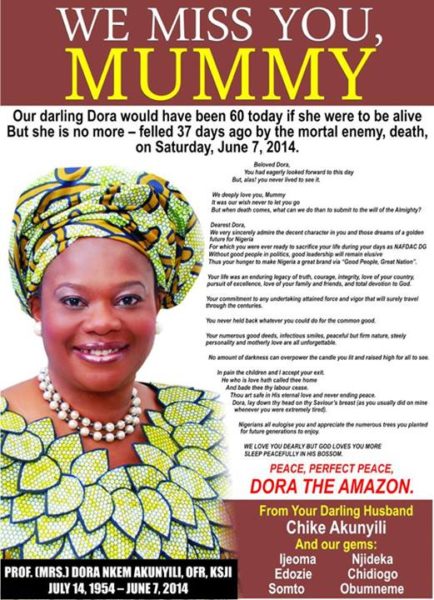 The family of the late NAFDAC boss Dora Akunyili release details about her burial programme. She will be buried on the 28th of August 2014.

The family of former Minister of Information and Communications, late Prof. (Mrs.) Dora Nkem Akunyili, has released a week-long programme of activities for her funeral, culminating in her burial on Thursday, August 28, 2014.

The programme, released today in Enugu by Prof. Akunyili’s husband, Dr. Chike Akunyili, starts with a Christian Wake-Keep at No. 2A Bishop Onyeabor St., G.R.A. Enugu, to hold from 4:00 p.m. on Friday, August 22.

A Night of Tributes is to hold at International Conference Centre Abuja from 5:00 p.m. on Monday, August 25, while a Mass would be held for her at Pro-Cathedral Catholic Church, Abuja, by 10:00 a.m. the next day, August 26.

After the Church Service, Dora’s body would leave for Enugu, where there would be a Mass at KSJ Temple at 4:00 p.m. After a High Requiem Mass at Holy Ghost Cathedral Enugu at 9:00 a.m. the next day (Wednesday, August 27), Dora’s body would be taken to UNCOMA Hall, College of Medicine, Ituku Ozalla, Enugu, for Final College Assembly to start from 11:30 a.m. From there, the body would be taken to Awka for Anambra State Government activities, then to Dora’s father’s house in Nanka, before being returned to her husband’s house at Agulu for a Vigil Mass/Wake-Keep.

Dr. Akunyili in a statement expressed gratitude to Nigerians for their outpouring of love and support for his family at this moment of grief. “This has gone a great way in helping us to cope with the monumental loss of our precious gem, my beloved wife, Dora,” he said.

It would be recalled that Prof. (Mrs.) Akunyili, a former Director-General of the National Agency for Food and Drug Administration and Control (NAFDAC), died last Saturday, June 7, after a two-year battle with cancer.