BN Movies & TV is constantly presented with a lot of modern stories, so it is always a breath of fresh air to see movies that take us back in time.

Frank Rajah Arase is giving us the exclusive first look at his new production – Iyore. It is co-produced by Kwame Boadu and Heroes Films Productions.

Iyore means “The Return: A Life After Life“. It is based on the history and the culture of the people of Benin, Nigeria, where Frank Rajah comes from.

Iyore – a mixture of historical facts and fiction – explores a tragic love story centered on the rich culture of pre-colonial Benin through to the present day of Benin while exploring the supernatural ideas of reincarnation.

Iyore tells the story of a life after life…a circle that we live not remembering who we were in the world before, a mythical tale set around the ancient city of Benin kingdom, Edo state of Nigeria.

This epic feature is a mixture of historical facts and fiction. It explores a tragic love story centered on the rich culture of pre-colonial Benin through to the present day of Benin whilst exploring the supernatural ideas of reincarnation.

When School Teacher Osarugwe (Rita Dominic) begins to teach her class about the historical tales and conquests of the Benin Empire, she opens up the door to a love story surrounding one of the three sacred virgins of the great Benin, Amenze (Okawa Shaznay) and Edosa (Desmond Walter).

Amenze, a virgin maiden whose fate is to be buried alive with the King once he has died is holding a secret that could destroy her and the sacred traditions of the Kingdom forever.

In order to avoid the mortification, she escapes the Kingdom along with her lover Edosa. Their escape causes an uproar, which leads to a series of battles between kingdoms and kings.

As the story evolves, Osarugwe herself is going through her own personal battles when her childhood love Prince Azuwa (Joseph Benjamin) resurfaces to profess his undying love for her. Confused due to the fact that she is now a married woman, Osarugwe is caught up in an inner battle of what is right and wrong.

Osarugwe’s story is so vividly reminiscent of the story she tells her students in school, that the idea of reincarnation becomes so prevalent. They say the soul of man is immortal, and will be refreshed again in another life.

This magical tale is sure to bring out the scents and sites of old time Benin whilst exploring the beauty of forbidden love and the idea of reincarnations.

Go Behind the Scenes! 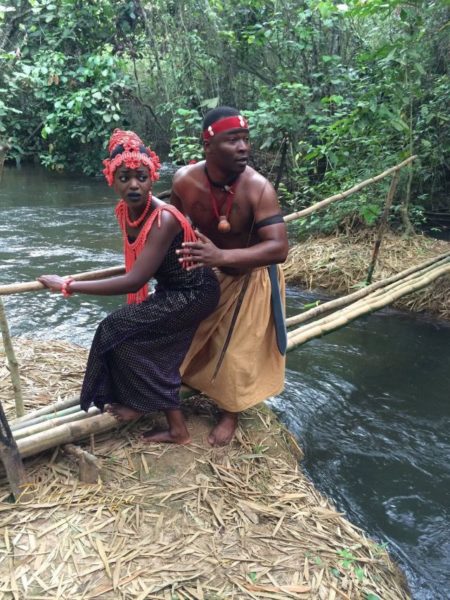 Frank Rajah Arase says Iyore is the best film he has produced and directed so far.

It was born out of the keen interest in telling an African tale with a rich cultural background and as a son of the soil of the great Benin kingdom I sure will leave no stone unturned.

We can’t wait for the trailer.