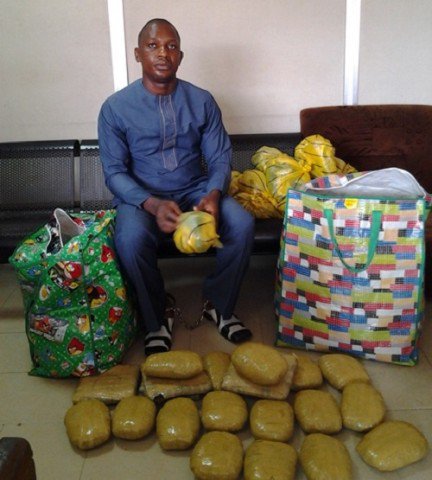 He reportedly hid the drugs – “11.06kg of dried weeds that tested positive for cannabis” – in food items, and was preparing to get on a Qatar Airlines flight, when he was apprehended.

Upon interrogation, David is said to have confessed, stating that he intended to sell the drugs so that he could use the proceeds to purchase motorcycle parts in China.

“I gave a business partner the sum of $30,000 to supply me goods and he disappeared. This brought my business to its knees and I have been struggling to take care of my wife and child since a year ago. I met many people for financial assistance but nobody was willing to help until I was wrongly advised. A friend told me to smuggle cannabis to China,” he said.

The suspect will be charged to court soon.

Another Dose of Cuteness! See Photos of Jason Njoku & Mary Remmy’s Son at 1