Charles Novia Weighs In On Ultimatum by Northern Leaders for GEJ 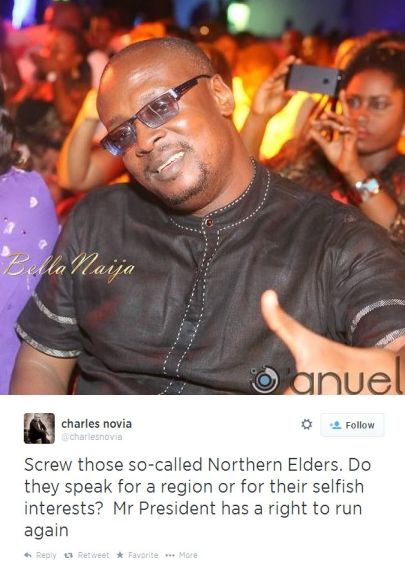 On Monday, Northern leaders declared that they are giving President Jonathan an ultimatum till the end of October to bring back the over 200 school girls abducted in the Chibok area of Borno state by Boko Haram and failure to do so means he is not fit to seek a re-election in 2015.

The Senior Special Assistant to the President, Doyin Okupe released a statement a day later, stating that the commander-in-chief does not need the threats by the faction to bring back the girls.

Opinionated Nigerian filmmaker Charles Novia is also speaking out on the topic.

Screw those so-called Northern Elders. Do they speak for a region or for their selfish interests? Mr President has a right to run again

He can be stopped through the ballot box not some silly and self – serving threats from those who ran this country aground once.

When cabals reduce the office of the President to one who buckles under threats, then it is time to defend the sanctity of that office.

They orchestrate a kidnap and use that as a blackmail tool when it backfires. Clap for them!

Ebola: 2 Die in Makurdi after Drinking & Bathing With Salt Solution