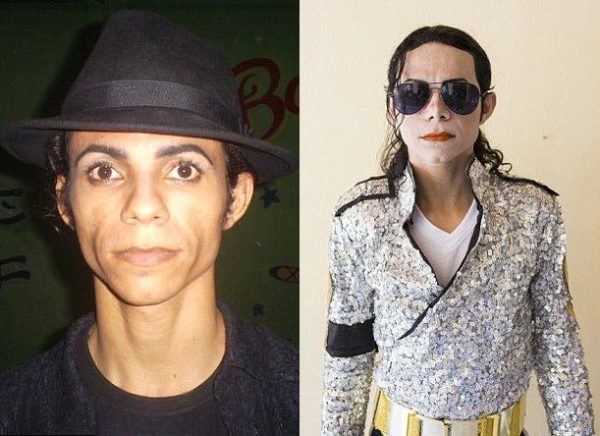 Look at the photo on the right, that isn’t the late Michael Jackson but a huge fan of his.

Meet 32-year-old Antonio Gleidson Rodrigues who used acid to lighten his skin complexion and spent about $3,367 on a series of cosmetic procedures to look exactly like the late King of Pop.

In 2009, the Brazilian man underwent his first operation. He had his nasal septum corrected to allow him reach higher notes when singing.

“I wasn’t able to reach notes like Michael before but after surgery I can now sing some notes in falsetto,” he shares about the first step in his transformation.

The ex-drama teacher later had hyaluronic acid injected into his face for a whitening effect and botox injections to enhance the area under his eyes. Rodrigues also tattooed his eyebrows and had a cosmetic procedure to correct his gap teeth.

But he isn’t done. He tells the Daily Mail UK that, “If I can afford it in the future, I am thinking of working on my cheekbones so I can get rid of the wrinkles along my mouth – I also want to have my eyebrows arched.”

I would like to have my forehead tattooed and have my nose made even slimmer.”

His aunt is scared about obsession, she says “He is obsessed. Sometimes he will spend hours on the internet looking for things related to Michael Jackson. I worry for his health – I want him to come downstairs and eat a sandwich.

I also worry when he goes into surgery, I never want him to feel disappointed and sometimes surgery doesn’t work out the way you would want it to.”

He also said Michael’s death was a devastating experience for him. He currently has concerts in which he performs,  imitating Jackson.

And It Continues…Wizkid Hits Back at Davido

How Many Stars Can You Spot in Ice Prince’s N Word (Remix) Video? | Watch