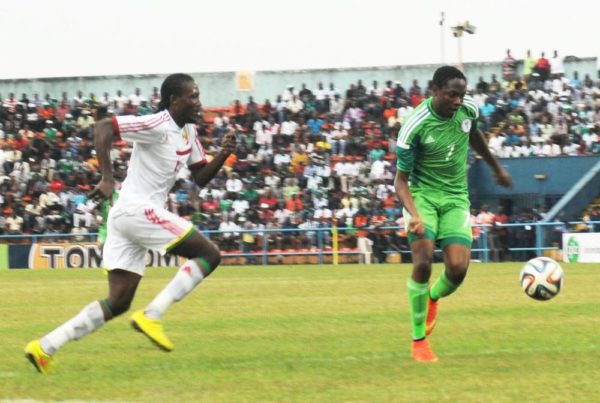 The Super Eagles lost 2-3 to the Congolese Red Devils,  who are now placed second in Group A behind South Africa.

Eagles opened scoring in the 14th-minute of the game but Prince Oniangue drew level for the visitors three minutes later.

Thievy Biofouma made it 1-2 in the 40th- minute before adding the third goal through a penalty kick early in the second half to make it 1-3.

Eagles pulled one back through Gbolahan Salami in the 89th-minute but it was not enough to earn the Eagles any point.

The Coach Stephen Keshi-tutored team will now hope to make-up for the home loss when they travel to Cape Town on Wednesday to play Bafana Bafana of South Africa.

Bafana Bafana lead Group A with three points followed by Congo still on three points but with a lesser goal margin.

Eagles are third in the group, while Sudan is at the bottom of the log having lost 0-3 to South Africa in Omdurman, Sudan, on Friday.