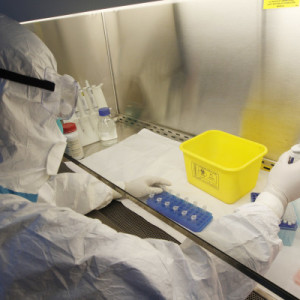 Abuja (NAN) – The Minister of Health, Onyebuchi Chukwu, on Monday said 271 people suspected to have contracted the Ebola virus were under surveillance in Lagos and Port Harcourt as at Sunday.

Chukwu made this known in Abuja at the second emergency National Council on Health meeting on Ebola Virus Disease (EVD) outbreak in Nigeria.

He said that 72 persons were under surveillance in Lagos and 199 in Port Harcourt.

“There is nobody under surveillance in Enugu now and no case of EVD in Enugu State. As at Aug. 31, 278 contacts in Lagos state have completed the 21-day surveillance, and have been discharged.

“In Enugu, all the six identified contacts have completed the 21-day observation period and have been discharged,’’ he said

The minister said that it was expected that a few more contacts could develop the EVD, especially in River state, before Nigeria could see the last case of the disease.

He explained that the strategies for containing the disease in the country were focused on appropriate information, education and communication and sustenance of the surveillance systems.

Other strategies, according to him, are reduction in harmful practices that promote the spread of the virus, provision of adequate care for confirmed cases and active contact tracing.

Chukwu said the National Centre for Disease Control (NCDC) had received approval for the re-production of copies of the protocols and Standard Operating Procedures (SOPs) for management of Ebola cases.

He said that the approval also included protocols for submitting samples to the laboratories and burying of victims of the disease.

He disclosed that Ebola virus could be diagnosed in five states in the country and Abuja and listed the states as Lagos, Oyo, Edo, Ogun and Rivers.

Chukwu said that the ministry had planned to procure additional mobile laboratories for Abakaliki, Port Harcourt, Bauchi, Jos and Sokoto.

He added that the ministry had also proposed a special fund to support affected private hospitals that complied with the policy of seeing all patients and reported suspected cases.

“Mr Atedo Peterside’s ANAP Foundation is supporting affected private hospitals that complied with the policy of seeing all patients and reported suspected cases of EVD with N100, 000 per bed space per day.

“Already, First Consultant Hospital in Lagos has benefited under this scheme to the tune of N8 million,’’ he said.

Chukwu said that the number of Ebola virus cases in the country was 16, adding that number of cases treated in the isolation centre in Lagos was 13 while number discharged was seven.

He said that total number of deaths among those treated in Lagos was five while those still receiving treatment in Lagos were two.

“The three confirmed cases not treated in Lagos comprise a surviving primary contact of the index case (Patrick Sawyer), an ECOWAS Commission staff; a private medical practitioner and a female patient.

“An ECOWAS Commission staff who became symptomatic, evaded surveillance in Lagos, traveled to Port Harcourt and infected his attending physician,’’ he said.

Also speaking, Somieari Isaac-Harry, the Permanent Secretary, River State Ministry of Health, said that out of the three contacts isolated and being treated in Port Harcourt, two had been confirmed negative.

He said that the result of the third person was being awaited, adding that the state government had developed a disease surveillance notification system in all the 23 local government areas.

US Targets Leader of Al-Shabab in Somalia Air Strikes