Ebola: Foreign Minister Says no basis for Discriminating against Nigerians after WHO Certification 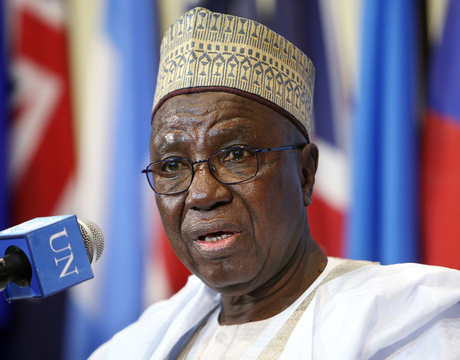 Nigeria’s Minister of Foreign Affairs Aminu Wali has asked countries to stop further discrimination and stigmatisation of Nigerians over Ebola after the main UN health body certified the country free of the virus.

Wali in a speech delivered on Tuesday in Berlin at the Nigeria-German Bi-National Commission (BNC), praised the efforts of President Goodluck Jonathan in the fight against Ebola Virus Disease (EVD).

A statement of his speech was e-mailed to the News Agency of Nigeria (NAN) in Abuja on Wednesday.

The minister recalled that the World Health Organisation (WHO) declared Nigeria free of Ebola on Monday (October 20th).

The health body arrived at the decision after Nigeria underwent two incubation periods of 21 days each without the appearance of any new cases.

“This is a testament of the personal commitment of President Jonathan to the eradication of the disease.’’

He praised the aggressive efforts of the Nigerian Government and Nigerians who complied with the WHO instructions on preventive measures that have succeeded in containing the spread of the disease.

“In recognition of the variant and successful efforts of the Nigerian government, there is therefore no basis for stigmatisation and discrimination against Nigerians traveling all over the world,’’ he said.

Wali expressed concern that the achievement recorded by Nigeria cannot be said to be the case in neighbouring West African countries still battling the disease.

He called on development partners to increase support to current efforts at controlling the spread of the virus, particularly in the West Africa Sub region.

“Nigeria has donated the sum of $3.5 million towards this effort and would be happy to have Germany and our EU partners come on board,’’ he said.

On the ceasefire deal between Nigerian armed forces and Boko Haram insurgents, Wali said he was confident that the security situation in the North-eastern part of Nigeria would soon return to normalcy.

He told the meeting, attended by his German counterpart Frank-Walter Steinmeier, that Nigerian armed forces was working in concert with Nigeria’s neighbours and development partners to fight the insurgency.

He said the Nigerian armed forces had regained control of some key towns in the North eastern part of the country, which were hitherto under the control of the insurgents.

“We have also ensured that in this war, the armed Forces observe their Rules of Engagement, respecting the human rights of the people in the affected areas.

“It is important to note that a secure atmosphere must be created for a full enjoyment of human rights by all.”

He called on Germany and the international community to continue in their support to Nigeria to address the challenges posed by insurgency.

The minister thanked Germany for committing a total of 41.5 million Euros (N8.9 billion) to various projects in Nigeria in form of grants to ongoing programmes in the health, energy and security sectors.

He said Germany recently approved a grant of 21.5 million (N4.6 billion) to Nigeria for the programme on promotion of renewable energy for the energy sector.

He also acknowledged the 15 million Euro (3.2bn) for eradication of polio programme currently on- going and yet another 5 million Euro (N1 billion) for security strategy purposes.

“The various forms of assistance from your government are deeply appreciated by the Government and people of Nigeria,’’ he said.

Ebola Drug Trials to start Within Weeks in West Africa – WHO