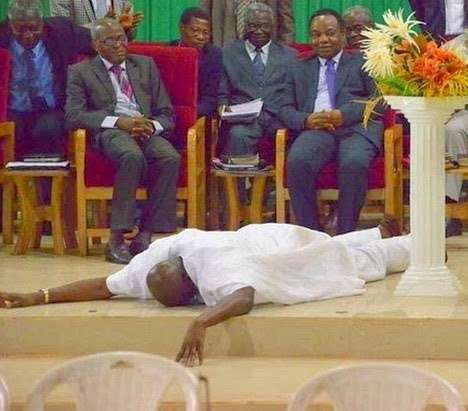 Newly elected governor of Ekiti State, Ayo Fayose, is in a thankful mood.

During a thanksgiving service that took place at the Deeper Life Praying Camp, Ajebandele, Ado Ekiti, yesterday, Fayose reportedly laid down flat on the floor as he thanked God for blessings on his life. The photo above, which was reportedly taken at the service, has since gone viral.

Speaking at the service, Fayose said his re-election was due to divine intervention, Vanguard reports.

He reminisced about how he left the Government House eight years ago, and how according to him, he was persecuted for crimes that he didn’t commit.

“Having a second chance is very rare. If this time has been in Bible days, my name would have been one of the names to be recorded as those who God gave a second chance…
My return to government is not common in history. It is a rare miracle. During the seven and half years of my political wilderness, I was taken to Court at least 59 times over what I knew nothing. This is besides the 45 days I spent in Ikoyi Prisons,” he said.

Fayose’s wife, Feyisitan, also shared her testimony, stating that God had revealed her husband’s re-election to her.

“God revealed to me that my husband, Mr Ayodele Fayose, will return as the Governor, but He never told me the time. God told me that our return would be done in such a way that will beat the people’s imagination.

At a time, I prayed to God to please push my husband out of politics. Later, God told me that  He will leave him there for him to prove His power,” she said.