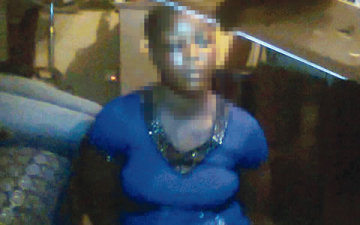 Lagos police have arrested a woman for allegedly abducting her stepchildren and killing one of them after accusing her husband of refusing to buy Sallah clothes for her son.

The woman, Aminat Akanni, is said to have killed her stepdaughter, Nofisat, by pushing her into a soakaway, Punch reports.

Akanni was arrested on October 9th, at CMS Bus stop at Lagos Island.

Prior to the arrest, 4-year-old Nofisat, and the other stepchild, 7-year-old Lateef, had been declared missing on October 3rd, which was one day to the Sallah celebration.

After the arrest, Akanni reportedly confessed to the abduction of the children, and to the murder of Nofisat.

The children’s father, Moshood Mubo, told police that the accused, who is his second wife, abducted the children because she wanted to “punish him for not buying Sallah clothes for her own son, and for failing to take care of her.”

I married Aminat in 2010. In order to avoid a crisis at home, I rented an apartment for her at Mosalashi Street, Alakara in Orile. She has only one son for me. His name is Yusuf. She does not come to Church Street, Lagos Island where I live with my first wife.

He further stated that:

“What happened was that on the evening of Friday, October 3, when I returned from work- just a day to the Sallah celebrations- I sent the two children to go buy biscuits in front of the street. That was around 7pm. We expected them till around 9pm. I was shocked. I quickly rushed to the Adeniji Adele Police Division, and reported the incident.

“Believe me, I and their mother, Funmilayo, could not sleep all through that night. We were walking around throughout the night from one police division to the other, repeating the same thing. The whole Sallah celebration was a sad one as I looked for my two children. Little did I know that it was my second wife who sneaked into our area to abduct them.”