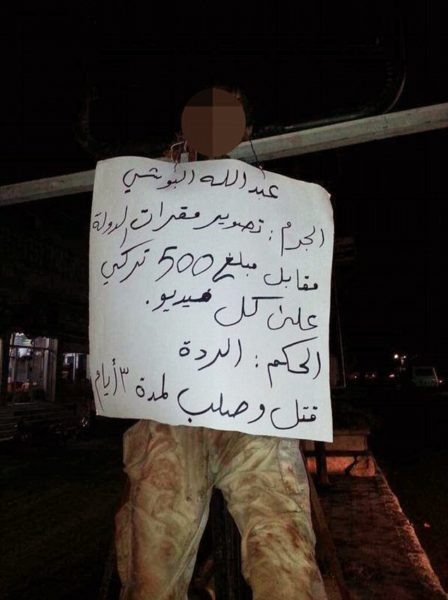 ISIS terrorists have crucified and murdered a 17-year-old boy after accusing him of being paid to take pictures of their headquarters in Syria. They also accused him of apostasy – abandoning his religion.

The boy was crucified in the central square of the insurgents’ de facto capital Raqqa, Daily Mail reports.

On the placard around his neck, it is written that he has been crucified for three days for apostasy and for being caught receiving 500 Turkish Lira for each photograph he took of ISIS’ headquarters.

Charlie Winter, a counter-terrorism expert, says that crucifixion is a punishment ISIS uses for specific crimes.

“Crucifixion has been used many times before – it’s an age-old punishment dealt out to people who have committed treason.

The Islamic State’s use of crucifixion as a punishment stems from its fundamentalist interpretation of Verse 33 of the fifth book of the Koran.

The verse reads: ‘Indeed, the penalty for those who wage war against Allah and His Messenger and strive upon earth [to cause] corruption is none but that they be killed or crucified or that their hands and feet be cut off from opposite sides or that they be exiled from the land.’

‘That is for them a disgrace in this world; and for them in the Hereafter is a great punishment, ” he said.