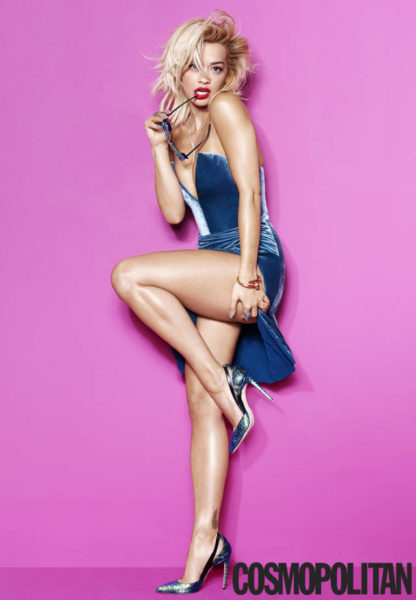 Rita Ora was undoubtedly devastated after her relationship with producer Calvin Harris was broken off via Twitter and a few months down the line the British singer is still answering questions about the details surrounding their separation.

Rita Ora covers the December 2014 issue of Cosmopolitan magazine and in it she talks her sexuality, her body, feminism, her breakup with Calvin Harris and more.

Here’s what the 23-year-old entertainer had to share with the mag:

On her breakup with Calvin Harris: “It was the right guy at the wrong time. I was about to start a tour, and he was also all over the place. There’s only so much you can do when you don’t see each other. I really admire people who have long-distance relationships. It’s an incredible achievement. I couldn’t do it.”

On her sexuality: “I’m very proud to say that I think about sex. It’s what everybody thinks about, whether they say it or not. For me, sex is a form of getting to know a person – feeling someone’s skin.”

On loving her body: “You have to come to terms with loving your body. Stand naked in front of the mirror and say, ‘I’m f*cking sexy.’ That’s where it starts.”

For more from Rita, visit Cosmopolitan.com.

Trending Video: Catch the Visuals for Adaobi by the Mavins Crew