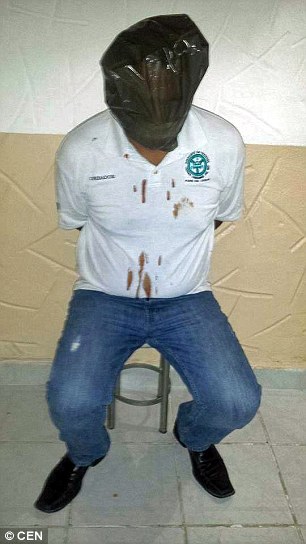 An unemployed Mexican man faked his own abduction just so he could extort $450 ransom money from his wife, who is a banker.

Mexican authorities state that Guido was jealous and embarrassed by the fact that his wife earned more money than him.

Reyes took Guido to an abandoned house, tied him up, sat him on a stool, and sprinkled fake blood on his shirt. He then took photographs of him, which he posted on Guido’s Facebook page.

They then sent a message to Guido’s wife, stating that her husband was 900 miles away and being tortured. They also instructed her to pay $450 as ransom, or else Guido would be killed.

“I was seriously worried but when I contacted them they said I should leave the money at an address in Mexico City. I asked them why I should do that if they were in Playa del Carmen, and they just said do it. But it didn’t make sense so I contacted the police,” said his wife.

The police examined the message and discovered that it had been sent from a nearby location, and not 900 miles away.

“We found them in a house about 300 metres away. They both confessed and were arrested on the spot,” said a police spokesman.

The men are currently facing a five-year jail sentence.