Happier Days before the Incident

A promising secondary school student is presently facing major challenges with her eyesight after she was slapped by her school principal’s secretary.

The 14 year old is an SS2 student of the Bishop Philips Academy, Ibadan, Oyo State.

She narrated her sad story to the Sunday Tribune;

“On Thursday, January 29, students were having an Agriculture class, so those of us offering Food and Nutrition left the class and three of us went to stay in one of the rooms in the building.

“We saw our teacher from the window of the room so we wanted to step out to go and meet her. As we were about to leave the room, we saw the secretary to the Principal, Mrs Funke Fasina. She asked us what we were doing in that room but before we could explain, she slapped us one after the other.

“By the time I got home, my left eye had turned red and painful. I told my mother what happened but she dismissed me, saying that I would not have been slapped if I didn’t do something wrong. On Monday February 9, my mother followed me to school and the principal asked my mother to take me to the hospital. 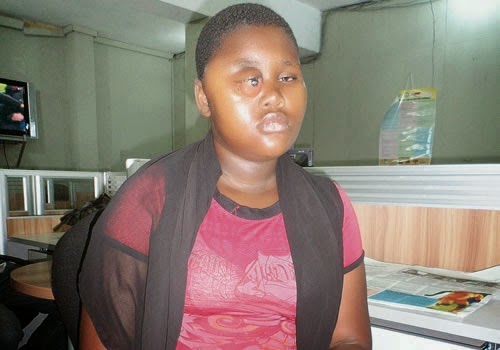 Student after the Slap

“We went to Catholic Hospital, Eleta, Ibadan and we were told to do the scan of the eye. By then, my eye had become bulgy and I was no longer seeing clearly. We went to St. Gregory’s Ultrasound Centre, Yemetu. From there, we went to the University College Hospital, Ibadan and I was told that I would undergo surgery. We were told to bring N300,000 as deposit. My parents have reported the case at the police station in Alakia Adelubi and the woman admitted that she slapped me.”Before the slap, she never had any pain or itch in her eye, so the report that she had a problem with her eye does not hold water. “Now I can no longer see with my right eye and I am going through a lot of pains,” she stated.

The victim’s parents and relatives are distressed by the situation including the financial burden of the treatment. They have also complained about the level of service received at UCH in Ibadan. They are claiming that the medical report was altered by a staff member of the hospital related to the accused to claim the victim had an underlying eye issue, therefore suggesting the present predicament did not originate from the slap. They have not received any financial assistance from the accused or the government so far and are struggling to fund the treatment. The case has been transferred to the Department of Criminal Investigation and the accused has been arraigned in court.