Meet Mercy, Sarah, and Deborah – three of the over 200 Chibok girls who were abducted by Boko Haram in April 2014. They were some of the few lucky ones that escaped captivity, and have been featured in Cosmopolitan magazine. 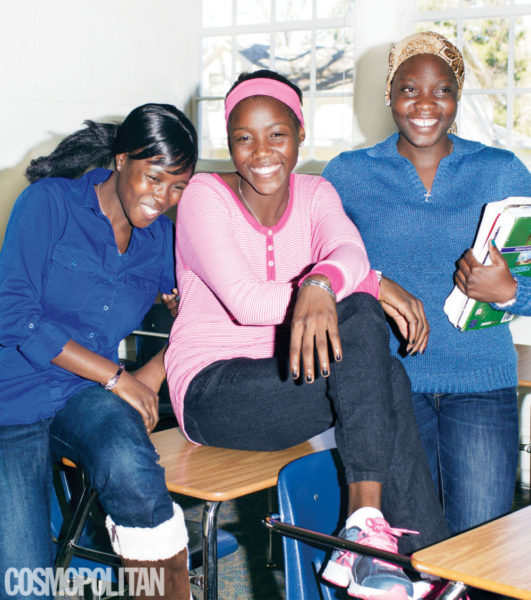 According to the magazine, the trio, in addition to another girl named Grace (who asked not to be photographed) are now finishing up their education at Canyonville Christian Academy, a high school in Canyonville, Oregon.

Here are excerpts from the feature story:

She  (Grace) and three other Chibok girls are quietly finishing their education at the Canyonville Christian Academy, a cozy boarding school with students from more than a dozen countries. Grace wants her tale of escape to be told. But she is not too eager to do the telling.

I sense this the moment I meet her. It’s a chilly spring Tuesday, and she and the other Chibok girls are leaning against a chain-link fence, relaxing after track practice. Cathy Lovato, the head of school, introduces me, and the girls turn to me, their faces suddenly serious. Grace barely makes eye contact.

For the girls, arriving in America was like landing on Mars. They had grown up in deeply poor, rural villages with no Internet access and in some cases a sole landline phone for the entire village. In Oregon, everything was new: winter weather, puffy coats, remote controls, trampolines, yogurt-covered pretzels, cheerleaders, ice skating, karaoke. They spoke only a little English.

The first girl to arrive, Mercy, came this past November. School president Doug Wead recalls Mercy’s first-ever encounter with an escalator. As she stepped onto the moving staircase at the airport, she panicked and dropped her bag. That night, at the hotel, she took a bath and stayed there for hours. “Later, my wife checked in on her, and she was asleep on the bed, lying on top of the fluffy comforter,” says Wead. “Her coat was on, fully zipped.”

The girls came to Canyonville with the help of a nonprofit group in Virginia, the Jubilee Campaign, and activists from Nigeria. The girls, all of whom are Christian, live in constant uncertainty, unsure whether relatives are alive or dead, whether their homes have been burned. They keep in touch with loved ones by phone when possible amid the chaos.

Do Not Miss Out on up to 50% off in the Konga Summer Reign Flash Sale!