Pres. Obama on Buhari's Time in Office: I Appreciate His Work so Far 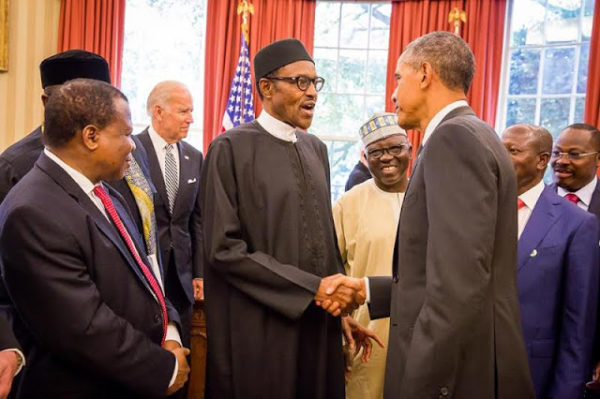 Obama gave the assurance in Washington DC, when he received President Muhammadu Buhari, who was on 4-day official visit to the U.S.

According to him, Buhari has come with a clear agenda to tackle the problem of insecurity occasioned by the activities of Boko Haram sect as well as other violence criminal activities.

Obama expressed appreciation to Buhari’s leadership style so far, saying that his administration would continue to assist and help Nigeria in overcoming its challenges.

Recently, we saw an election in which a peaceful transition to a new government took place. Nevertheless, the people of Nigeria understand that only through a peaceful political process that can change takes place.

President Buhari came into office with reputation for integrity and a very clear agenda that is to make sure that he has been bringing safely security and peace to his country.

He is very concerned about the spread and the violence that is taking place there and the atrocities and has a very clear agenda in defeating Boko Haram and extremists.

I want to emphasised how much I appreciate President Buhari’s work so far. I have seen him put together a team so that we can do everything that we can to help him succeed and help the people of Nigeria succeed,” Obama said.

Obama also assured that American government would continue to partner with Nigeria in ensuring political stability in Africa and around the world.

He described Nigeria as one of the most important countries in the world and congratulated the country for conducting peaceful elections.

He also commended Nigeria for taking leadership position in the fight against the spread of diseases like Ebola and Polio and pledged that his administration would continue to accord Nigeria the necessary recognition to bring peace to Africa and the world.

In his remarks, President Buhari commended the American Government under the leadership of President Obama for mounting pressure on former Jonathan’s administration to conduct a free and fair election in Nigeria.

According to him, Nigeria will remain forever grateful to America for this singular act.

The visit of the Secretary of State before the elections to see the former president, the Chairman of Independent National Electoral Commission and the opposition was a positive trend that “saw us through the elections’’.

Buhari further stated “.. the maintenance of pressure by United States mainly and Europe to make sure that the elections were free, fair and credible made us to be where we are now. It would have been almost impossible if the United States did not maintain the pressure on the former Nigerian Government.’’

Buhari, therefore, thanked Obama for inviting him to visit his country as well as his administration’s support to Nigeria.

Governors of Nasarawa, Borno, Imo, Oyo and Edo States as well as some Nigerian government officials accompanied the president during the visit.