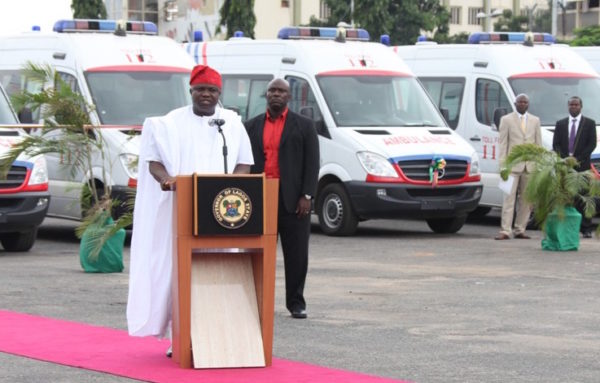 Lagos State Governor, Akinwunmi Ambode, has commissioned 20 Mobile Intensive Care Unit (MICU) Ambulances and 26 Transport Ambulances, in what he says was in fulfillment of his administration’s commitment to bring quality healthcare service closer to the people particularly during emergency situations.

The Governor who spoke at the Lagos State House, Ikeja, said that the commissioning of the ambulances, which will be deployed free of charge for Lagosians, was part of his pledge to run a government that will leave no one behind.

He said the acquisition of the new ambulances was also in consonance with his administration’s mantra to run a government of continuity with improvement.

According to him, the government is commencing with 26 Transport Ambulances that would be stationed at the 26 General Hospitals within the state for easy access. He added that his administration has restructured the State Emergency Ambulance Services and increased the fleet of new Mobile Intensive Care Units by 20, bringing the total number to 33 units.

Want Some Magic Cash? Diamond Bank Has Got You Covered!