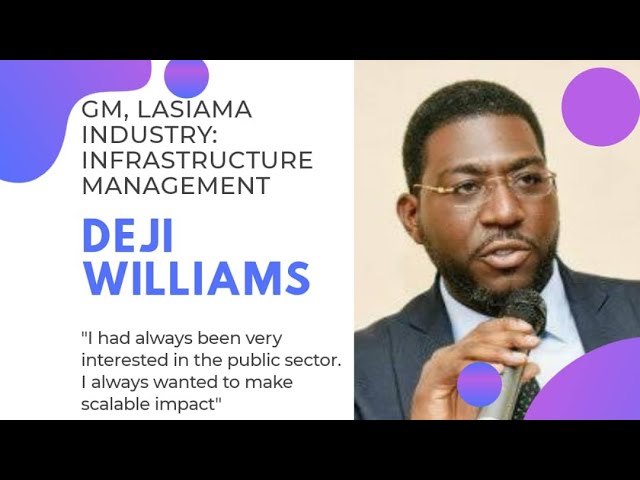 This week on Under 40 CEOs, Familusi Akin Babajide (FAB) sits with Deji Williams the Lead Consultant/CEO at Facility Management Express.

Deji Williams attended Corona Primary School Ikoyi, Lagos Secondary education at St. John’s Ilupeju for 2 years before going to a private boarding school – Framlingham College in Suffolk, UK. He bagged a Bachelor’s Degree in International Business and Global Issues from Franklin University, USA and a Masters in Public Administration Affairs from University of Lagos.  He also holds certificates in Project Management, International Facility Management and is a member of Illumination Professionals Association (Nigeria).

Deji volunteered for various out of school extra tuition programs for children raised by single parents or from low income homes, and raised money for numerous charity events while in the university. He was also a student athlete and played rugby gaining such honors as Under-19 team USA All American, Mid-West Major League Rugby Allstar team and playing for 3 seasons in the USA Major league Rugby. He also played Intramural American Football and was a part of the Ohio volunteer team for Senator John Kerry’s U.S.A Presidential bid.

Prior to his last appointment when this recording was done, Deji was Special Assistant to the Governor of Lagos State on Energy and was appointed to this role by His Excellency Akinwunmi Ambode in September, 2015. He was a Project Manager & Consultant, and is the CEO of Mowills Limited, an Infrastructure development and rehabilitation company with experience specializing in; building construction, road construction works, landscaping, facility management, street lighting, Signage’s and Street Directional Signs.

As General Manager at LASIAMa, Deji was responsible for all physical assets within Lagos borders and the vision is to establish a culture of maintenance and to champion the benefits of good maintenance practices across the state.

Watch this episode below: