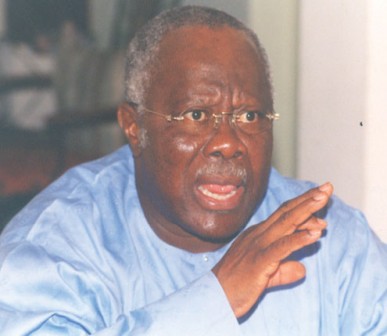 He expressed his opinion in a statement entitled: Neither Fashola nor Tinubu, Vanguard reports.
Here are excerpts from the statement, as reported:

We are living in a very interesting time. There is an air of repugnancy everywhere.

Most specifically in my state where the immoral stench and the dark odium of Mr Babatunde Fashola’s regime is daily being unearthed. The so called poster boy of yesterday is now being revealed in pure pollutant largeness, reeking of sharp practices and financial untidiness….

What is most disgusting and annoying in all these is the arrogant and the befuddled attempt of Mr Fashola to justify the apparent reckless misappropriation of Lagos State tax payers money to set up a personal web site. Fashola shows no remorse, no semblance of regret, no guilty nudging of conscience. Instead, he still attempts to ride a high horse, puffing and stomping in feigned seraphic innocence. We are not fooled…

We knew all along that the emperor had no clothes. Using N78 million  tax payers money to build a web site is reckless misappropriation.

The phony over N25 billion used to build a mere kilometer long link bridge is outrageous venality. The spurious N1.5 billion allegedly spent on phantom pedestrian bridges is another con game. And there are so many of these screaming illegalities observable in the record of our poster boy of yesterday…

Find out How you can Make your Dream Wedding Come True with Dunamis Events!