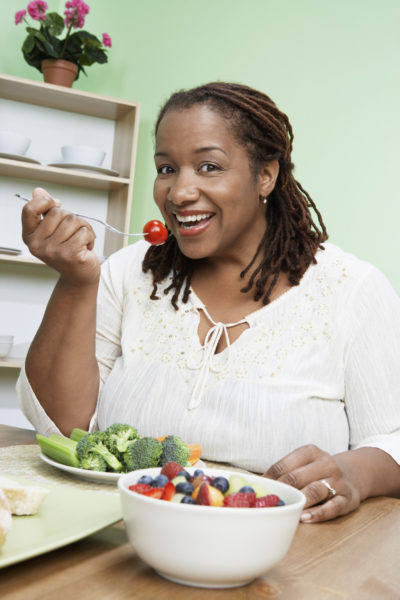 Where do you get your protein from? I can’t even tell you how many times I’ve been asked this question. If someone bought me a head of broccoli every time they asked me this question, my protein needs would be covered for life. Now here’s a counter question, how much protein do human beings need? 60%? 50%? 20%?

Nope! You guessed wrong. A mere 5%. 5% of protein. That’s all the body needs to thrive. The Food and Nutrition Board (FNB) has set a Recommended Daily Allowance (RDA) of 10% protein. They just say 10%, so people can endeavor to get at least 5% protein in.

10% of your total calories from protein will vary depending on how many calories you consume daily. However, for the average person, it works up to be about 60 grams – that you can get with your eyes closed.

Then you might ask, what is all the fuss about protein? Frankly I do not know. What I do know, however, is that there are lots of erroneous myths surrounding proper nutrition.

We all know at least one person who always says “carbs are evil.” And whenever they need to lose a few pounds for something, they ditch the carbs altogether and go heavy on the “lean” animal protein, protein powders and go hard in the gym.

But here’s the thing:
1) You cannot out train a bad diet.
2) There’s no such thing as lean animal protein. Animal protein generally has about 60% or more of its calories from fat.
3) Protein powder is not health food. Consuming a surplus of protein especially animal protein weakens the immune system and increases the risk of certain diseases. Vegan protein powders are not completely left out of it either (especially soy protein). A key ingredient in vegan protein powders is isolated soy protein. This ingredient is almost as harmful to the body as whey. Simply put, fragmented foods are not optimal for human consumption. Whole foods are the way to go. Soy is a perfect whole food. However, when you process it into isolated soy protein or soy oil, it becomes problematic

If you are pro protein all day, every day, perhaps you might need a little more convincing. Consider the fact that Robert Atkins the founder of one of the most popular diets on the planet- the Atkins diet. As you know the premise behind the Atkins diet is an animal protein heavy diet. Robert Atkins who people blindly follow died of a heart attack and was morbidly obese when he passed. In contrast, Asians who eat their weight in rice, consume minimal animal protein and lots of vegetables have very low rates of cancer, heart disease, diabetes and are often very lean. And trust me it is not their genes, because scientists have observed Asians who come to America and start to consume the Standard American Diet (SAD), when they do- they pack on the pounds. The fat you eat is the fat you wear and sadly when it comes to animal protein, you cannot separate one from the other. They come as a package.

Another example of how overconsumption of animal protein is harmful to the body is demonstrated in Colin T Campbell’s experiments in “The China Study.” He conducted a study in India to explain the correlation between animal protein and carcinogens. Carcinogens are cancer causing substances. He found that rats who were injected with the carcinogen (aflatoxin) who were fed a diet consisting of 5% protein did not show any symptoms of liver cancer. The other half, however, who had equal amounts of aflatoxin introduced into their system and who ate a diet of 20% protein developed liver cancer. As Colin advanced in his career he replicated the study on humans and found that no matter the carcinogen or toxic material which happens to get into the body, a low protein whole food plant diet had the power to nullify the effects.

I know this is a lot of information to take in, and you are probably like “Oh, great! Avoid protein- how is that possible?” Okay, hold your horses! Protein is not a bad nutrient. I do not subscribe to the paradigm of reductionism (which is treating each nutrient as a separate entity). Nutrition should be treated as a whole. Sometimes to really understand the different nutrients, one has to explain them separately. But when it comes to eating for health, it should be holism over reductionism. Eat your weight in fruit and vegetables. I always have a huge smoothie in the morning made of only fruits and vegetables. No powders or fairy dust. When you eat enough fruit and vegetables, you do not need to supplement. Also, carbs are not bad for you. Eat complex carbohydrates like sweet potatoes, yam, plantain, rice and quinoa. Opt for grilling, boiling or roasting. Vegetables, fruits, grains and starches contain enough protein and fat to meet your daily requirement. You should aim for 80% Carbs, 10% fat, and 10% protein.

Now, I am not suggesting that you MUST go vegan. Though that would be nice, and if I could have one super power it would be to make everybody go vegan. It would be really good for them, their health and the environment. Until then, keep the animal proteins minimal like the Asians do, so we can all be #teamforeveryoung one way or the other, maintain a healthy weight and keep diseases at bay #godwin