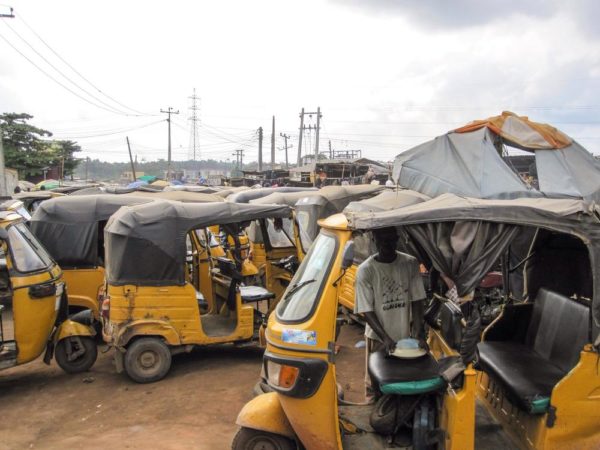 This is no handbook or manual, instead these are just facts on how to survive while taking public transport in Lagos.
Lagos is pretty small but the distance from the island to Mainland is allegedly the same distance from Lagos to Benin (no jokes). I once heard a story where a dude went to drop his friend who was travelling to South Africa at the airport and was still on 3rd mainland bridge when the friend called to say he had landed in SA #TrueStory.
I’m sure people who work on the Island and stay on the Mainland can relate to this article.

We often see JJCs (Johnny Just Come) who are visiting Lagos for the first time think this commute is a piece of cake. But when they experience it once or twice, they begin to sing a new tune.

Leaving your Mainland abode by 4:30am and getting to work by 9am is the easy part. Finding your way back to the Mainland is the hard part. So all you wannabe Lagosians, please pay close attention to the following life lessons from using the public transport system in Lagos.

Know Your Route
Like everything in life, you need to know what you want. In this case, know where you are headed. When you get to the bus stop, shout it loud and clear that you are going to Lekki phase 1 bus stop. Not Lekki Phase 2, Lekki Estate and definitely not “Somewhere in Lekki.” You need to know the exact bus to enter so you don’t get lost and then go through the stress of tracing your steps back. Ask your neighbours, ask relatives. This will go a long way in helping you locate your intended destination. I once entered the wrong bus and o boy it was not a funny experience. This happened because I had stayed too long at the bus stop and all I wanted to do was just get home by hook or crook. So, I suggest you are calm, calculative and alert when you find yourself at any bus stop because in Lagos, Rush hour is war hour.

Recognition Is Key
Some people won’t recognise what they want even if it slaps them in the face. This kind of attitude would not work in ‘Gidi. I pride myself on being able to recognise at least 5 of the many danfo buses and even the BRT ones that ply my route daily. So whenever I see or even hear them, I prepare myself mentally, emotionally and physically. Familiarise yourself with the type, colour and even the make of buses going your route. It’s not as hard as it sounds trust me. It’s pretty easy. In fact take a week to observe so you get conversant with it and not miss it.

Struggle
The Yoruba saying “Elemi lo ma last” which means “Only the strong survive”, best sums up the Lagos transport system. Even though things have gotten easier with the introduction of BRT buses and private cab services, people like us who still have to use danfos and Okadas have to be cut throat. Nothing in life is going to be handed to you; you have to take it by force. Out of the 1million people at the bus stop, there is a chance that 50% of them are going your route and it’s just a 14 seater bus in sight and you’ve been waiting at that bus stop for at least 1h30mins. This moment cannot pass you by. It is shove or be shoved. At the same time, please keep your bag and valuables close to avoid stories that touch.

Be Street Smart
I’m yet to meet someone who will successfully define what being street smart means. But if i was to give it a go, I’d say being street smart is being street smart. You can’t always play by the textbook. When on the street, you have to be extra perceptive. You should know when to run, when to hide, when to walk, when to talk and when to just keep your mouth shut. Tap into your inner agbero. Hell, this is Lagos. You need to learn how to enter into a vehicle in motion, and also protect your valuables all at the same time. It’s easy, oyinbo people call it called multitasking.

‘Forming’ Won’t Get You Anywhere
If you are prone to ‘forming’, the Lagos public transport system is not for you. Examples abound of guys while forming for girls, passed their intended destination because they could not scream out OWA! when the vehicle approached the bus stop. Or of girls who in the act of forming could not do the same because they didn’t want the other passengers to hear their strong tribal accents. So if you feel the bus conductor would strain himself trying to hear you speak, or mind that you and that fine girl have been maintaining eye contact since you boarded, then you are on your own.

Conclusion
Congratulations, JJC. Having assimilated these tips you are now on your merry way home. All you have to do is contend with the 4 hour traffic, don’t worry you’ll be fine, no one ever died from too much go slow. WELCOME TO LAGOS.

Quincy Iwediokpulu: Why Are Nigerian Weddings Now So Expensive?