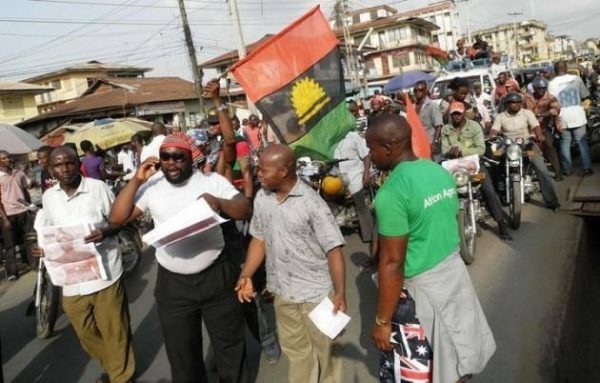 Some pro-Biafra activists in India under the umbrella of Indigenous People of Biafra have threatened to destroy the Nigerian embassy in the country as a means of protesting the detention of  Radio Biafra director, Nnamdi Kanu.

The protesters took to the streets earlier this week, wore vests bearing the insignia of Biafra, and staged a protest at the Nigerian High Commission building in New Delhi, Punch reports.

Eyewitnesses say protesters the protesters chanted a Biafra solidarity song, with lyrics, “Biafra save my bullet when I die.”

One protester said, “Today we are all over the world and we are making it very clear. We know your families all over the world. If Nnamdi Kanu is not released within 24 hours, we will bring down this building. Kanu has not done anything wrong, he is a prisoner of conscience kidnapped by the operatives of the Department of State Services. But we are warning that if they fail to release him, we will break down this embassy. Go and call all the police in India, they cannot stop us. We don’t joke about our leader. We are not afraid of jail.”

Another said,  “We don’t mince word. There should not be a clause to his release. After all, this embassy was built with our money. No matter the number of Indian police they put here, we will bring this building down. We are ready to die. We are dead already so we are not afraid of death.”

In response to the protesters’ threats, an embassy worker reportedly said he would convey theirmessages to President Buhari, who is currently in India.

Enjoy up to 40% off Weekend rates at The George Hotel…Breakfast included!