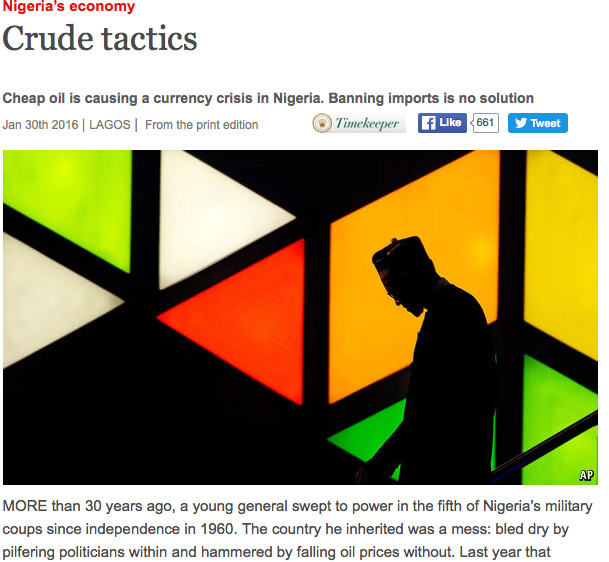 **
History is repeating Itself
MORE than 30 years ago, a young general swept to power in the fifth of Nigeria’s military coups since independence in 1960. The country he inherited was a mess: bled dry by pilfering politicians within and hammered by falling oil prices without. Last year that general, Muhammadu Buhari, became president again—this time in a democratic vote. The problems he has inherited are almost identical. So are many of his responses.

Jonathan is a what?
The government has cracked down on corruption, which had flourished under the previous president, Goodluck Jonathan, an ineffectual buffoon who let politicians and their cronies fill their pockets with impunity. Lai Mohammed, a minister, reckons that just 55 people stole $6.8 billion from the public purse over seven recent years.

How bad is the economy?
Income for the third quarter of 2015 was almost 30% lower than for the same period the year before, and foreign reserves have dwindled by $9 billion in 18 months. Ordinarily there would be buffers to cushion against such shocks, but Mr Jonathan’s cronies have largely squandered them. Growth was about 3% in 2015, almost half the rate of the year before and barely enough to keep pace with the population. The stockmarket is down by half from its peak in 2014.

“Oil Big Boys” feeling the Pinch
Domestic oil producers are feeling the pinch worst. Many borrowed heavily to buy oilfields when crude was worth more than $100 a barrel, and are now struggling to pay the interest on loans, says Kola Karim, the founder of Shoreline Group, a Nigerian conglomerate.

Banking Crisis Loading?
This, in turn, threatens to create a banking crisis. About 20% of Nigerian banks’ loans were made to oil and gas producers (along with another 4% to underperforming power companies).

Buhari’s Plan
The government’s response to the crisis has been three-pronged. First, it is trying to stimulate the economy with a mildly expansionary budget. At the same time, it is trying to protect its dwindling hard-currency reserves by blocking imports. Third, it is trying to suppress inflation by keeping the currency, the naira, pegged at 197-199 to the dollar.

Good Plan or Nah?
“Only the first of these policies seems likely to work.”

“Yet his policies on the currency seem likely to stymie that.”

“The various import bans (on everything from soap to ballpoint pens) are supposed to reduce demand for dollars, but have little effect.”

“Several local manufacturers have suspended operations. International investors, knowing that the value of their assets could tumble, have slammed on the brakes and some have pulled money out of the country just as their dollars are most needed”

“Today, as in the 1980s, the president is making a bad situation worse.”

Read the full article on the Economist’s Site