Let's Talk About it!: You Asked Him to Lend You Money But You Feel Some Type of Way About Paying Back

Money lending between friends can sometimes be tricky. {I wrote about it here} It becomes even trickier when it’s between two people with an amorous relationship. It shouldn’t… but it does. This is because somehow, in our subconscious, we have this idea of gender roles and money is a key element in certain people’s expectations of gender roles.

For instance, a man is ‘supposed’ to have more more money than a woman – to show that he can take care of his woman. That’s a subject that calls for thorough dissection, but we’ll leave that for another.

So, today, let’s talk about the dynamics of when a lady asks a man who takes her on a date for a quick loan.

The scenario below was shared on Gbemi Olateru-Olagbegi’s Instagram page a while ago. 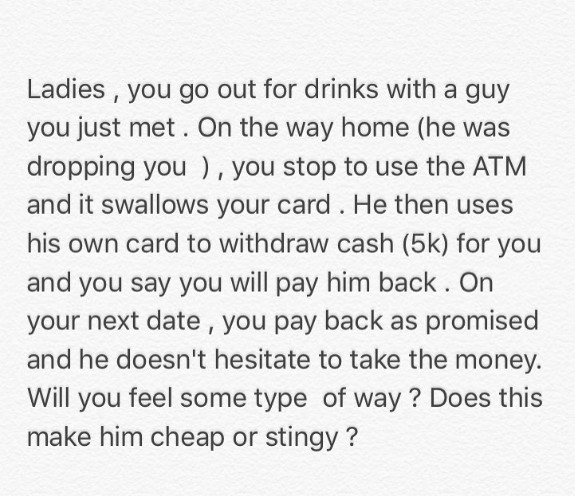 From the responses posted in the comments section, it appeared the elements of a lender and borrower status when there’s a hint of a romantic relationship – real or imagined.
Majority of the respondents said that the guy was stingy and he was the sort of person that a woman should run away from.

However, I think that while women are in the forefront of fighting for gender equality and progress for the Nigerian woman, we take at least 10 steps back by insisting that certain regressive thought patterns are the norm – and should be propagated as such.

In one voice, we want to be recognised as strong, independent women; with another voice, we’re saying that a man who accepts money we borrowed, is stingy and should be avoided.

I strongly believe that honour is a very important virtue and it goes beyond just paying lip service. Be a woman of your word. You ask for a loan, please plan to return it.

You don’t go to the bank, ask for a loan, then get mad that the bank is fine with accepting the returned money.

Relationships being measured and quantified in financial terms is a major reason why people go into wrong partnerships. Unless you believe your time, and affection has a monetary value; then that’s another kettle of fish entirely.

But, that’s what I think…

Let’s talk about it.